The Honda CR-V crossover is good all-rounder, but its appeal is limited by not offering seven seats 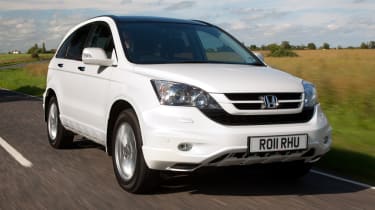 The third-generation Honda CR-V is one of the experienced players in the crossover market. It blends a relatively small footprint on the road with a tall body to create plenty of interior space, and thanks to taut suspension and a choice of strong 2.0-litre petrol and 2.2-litre diesel engines (both with 148bhp) it's more involving to drive than you might think. Load space is only average for this class, but the well-laid out cabin provides plenty of clever storage solutions. It's just a shame that the CR-V isn't offered with the option of seven-seats - a sticking point for some buyers.

The CR-V comes with two excellent engines, both with part-time four-wheel drive as standard. There's a 148bhp 2.0-litre petrol which likes to rev and a 148bhp 2.2-litre i-CTDi diesel, which delivers class-leading performance. On the road, the diesel’s 350Nm of torque makes it a perfect companion for long trips, and overtaking presents few problems. A low centre of gravity boosts stability and makes it car-like to drive. It’s not all good news, though, for the sporty suspension is a little firm on bad road surfaces.

The diesel's economy and emissions figures of 43.5mpg and 171g/km respectively are higher than rivals - but that's the price you pay for the strong performance. The petrol model returns 34.4mpg and 190g/km. Honda is known for its excellent dealer service, but check-ups are expensive. It’s therefore a good job that strong retained values compensate.

The CR-V is marginally taller than many rivals, but the well proportioned lines disguise this well. The lower half of the body looks chunky, with black plastic sump guards and flared wheelarches - these are body coloured on higher spec cars - while the top half is much smoother, thanks to a window profile that arches at the rear. We’re not totally convinced by the fussy nose, but it’s a bold design nonetheless. From the seats to the stylish steering wheel and clever handbrake, there’s a real sense of sophistication on the inside, too.

Despite being shorter than its rivals (and having a shorter wheelbase), the Honda offers plenty of space for passengers. The boot can expand to a handy 955-litres, there’s ample legroom and the flat floor is handy. However, there’s a major stumbling block: the Honda can only seat five. A third row of chairs doesn’t feature on the options list, and this limits its practicality as family transport. The driving position gives a great view of the road, and is enhanced by a high-mounted gearlever.

The CR-V scored four stars in its Euro NCAP crash test, but that doesn't tell the whole story. There's loads of cutting-edge safety equipment, including an advanced stability control system that can prevent towed trailers from weaving behind the car. Honda's Collision Mitigation Braking System is also included. It monitors the distance of the car in front and prepares the CR-V for impact if it senses a collision. Honda is renowned for being an engineering-led company that's proud of the reliability of its cars - and the CR-V is no exception.