The new Honda NSX hybrid supercar will arrive next year, and the first official images have been released 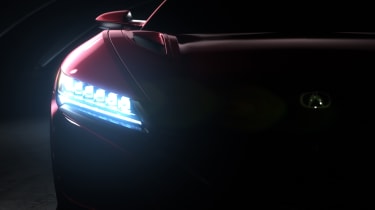 This is our first glimpse at the production version of the eagerly anticipated, mid-engined Honda NSX. Revealed in teaser images and a video, the Audi R8 rival will make its world debut at the Detroit Motor Show in January.

The concept car that previewed the NSX gave us a strong indication of what we can expect from the showroom model, and there are no real surprises thrown up by the teaser images with LED headlamps, bonnet vents and muscular haunches all carried over from the original concept. By lightening one of the teaser images (below) slightly it's even possible to see the shape of the wheelarches and the stretched headlights. 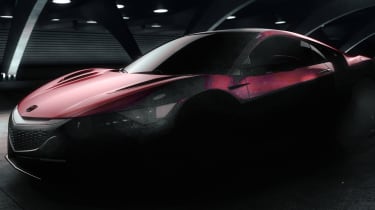 “After three years of intensive development work we are excited to reveal this next-generation supercar - the Honda NSX - to the world,” said Ted Klaus, chief engineer and global project leader over NSX development. “We’ve developed a human-centered supercar that responds to the will of the driver and that builds upon the NSX heritage.”

Beneath the skin, the NSX will be powered by a mid-mounted, direct-injection V6 engine driving the rear wheels, while pair of electric motors will power the front wheels. A third electric motor also boosts engine performance, with upwards of 400bhp expected.

A price tag of over £100,000 is expect to be slapped on the NSX but those fortunate enough to be able to consider a purchase will be out of luck as the first allocation have already been sold.

Production will take place in Ohio with around half of all models produced expected to be sold in North America. Production volumes will also be similar to that of the Audi R8, with five models rolling off the production line each day.

Are you excited to see the new Honda NSX in full? Let us know your thoughts below...