We get a first taste of Hyundai's premium brand, Genesis, in South Korea 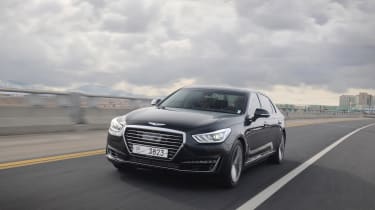 The important thing about the G90 for UK buyers is not so much how it drives, but what it points to. If Genesis really is to sell in Europe, it needs to be an improvement on previous ‘posh’ Hyundais – and it is. Genesis has some way to go before it matches even the likes of Lexus for brand image in this part of the world, but this car is a major step in the right direction. It’s Korea’s most credible attempt at a luxury car yet, and will do well in its target markets.

Does the car world need another premium brand? Hyundai seems to think so, having announced late last year that Genesis would become a go-it-alone marque to mirror, for example, Lexus’ relationship with Toyota.

Six new models are planned by 2020, and the first of these is the G90, ostensibly an alternative to the Mercedes S-Class that will be sold in markets such as the US, Russia, China and the Middle East.

Significantly, though, the lack of a diesel engine means there are no plans to sell the G90 in Western Europe. Indeed it’s unclear which – if any – new Genesis models will make it to Europe, although Hyundai design chief Peter Schreyer did suggest to Auto Express at the recent Detroit Motor Show that the two SUVs the brand is set to make stood the best chance of being sold in European showrooms (although whether that includes the UK is also to be determined). 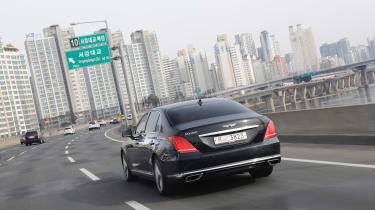 So what can we expect from the newly conceived Genesis? We got our first early taste in a brief drive of a Korean-spec G90 on the roads around the South Korean capital, Seoul.

From the outside, the car cuts quite an imposing figure. A large hexagonal grille dominates the front end, while a long bonnet, tall shoulder line and beefy rear haunches give it a look that blends a degree of elegance with a suggestion of athleticism.

The new brand’s winged badge sits atop the grille; from a distance you’d be forgiven for thinking it had taken some ‘inspiration’ from Aston Martin’s. 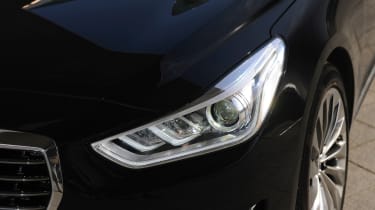 Inside, it’s upped its game, too – it’s certainly the most convincing ‘posh’ cabin from Hyundai yet. It’s impeccably built and features a mixture of leather trim with contrast stitching, real wood and polished aluminium inserts. There is undoubtedly more of a genuine premium feel than in some of the wannabe interiors we have seen on previous ‘upmarket’ Korean cars. 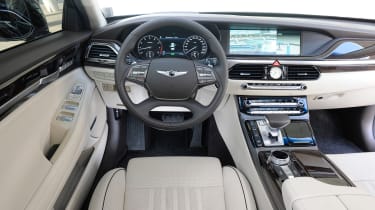 A 12.3 inch high-definition touchscreen dominates the dashboard, while at the rear there is more passenger space than in the Equus it replaces thanks to a 4.5-inch increase in the wheelbase. Rear occupants are also well catered for with individual screens and reclining seats.

There’s all the equipment you could feasibly want, although Hyundai R and D chief  Woong-chul Yang told us all Genesis cars will be “honestly” specced to keep costs down. He explained: “On some premium cars, manufacturers include unnecessary tech. Some things are put in that are never used. We won’t put stuff in that is expensive simply because it is a premium car”. 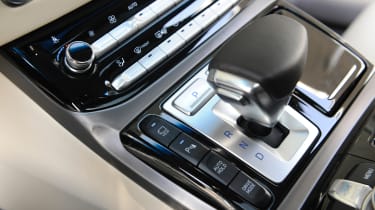 As you would expect, the overriding impression is of refinement. The Genesis makes swift, comfortable progress although occasionally there was a hint of engine and wind noise filtering into the cabin

0-60mph is a claimed 5.7 seconds with the V8, and it certainly felt capable of that, although flooring the throttle saw the gearbox occasionally struggling to keep up.

Four driving modes are available – Sport, Eco, Smart and Individual – although Sport is the only one where there’s a discernible difference. The steering weights up and the soft-ish ride got noticeably firmer, with imperfections on the road surface much more obvious. 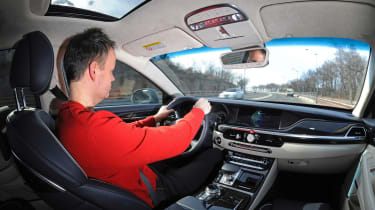 We only got a limited opportunity to give the Genesis a workout on back roads. While it was clear the all-wheel drive gave decent grip, there was noticeable body roll in corners – although that’s unlikely to be too much of a concern for the G90’s target buyers.

Judging by the amount of Equus and Genesis drivers we saw in Seoul, there’s a big appetite for the comfort and kit these models deliver – and the G90 offers more of the same in a superior all-round package that’s moving ever closer to what European rivals can offer. Whether that translates into European sales success for the brand in future remains to be seen.