The Genesis is packed with hi-tech kit and is decent quality, but it won't worry its German rivals 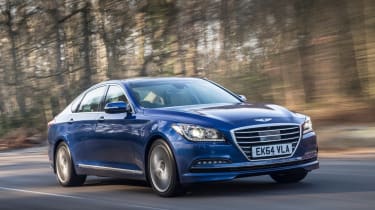 The Genesis has been Hyundai’s flagship model since its debut in 2008, but it’s never been available in Europe or the UK. However, that’s all set to change as the all-new second-generation car arrives.

Like its predecessor, the newcomer is an imposing four-door saloon that’s targeting the likes of the BMW 5 Series, Mercedes E-Class and Lexus GS.

There’s only one version, which is powered by a 3.8-litre V6 engine paired with an eight-speed automatic, with Hyundai saying they will sell just a handful of cars each year. The lack of diesel powertrain means the appeal of the Genesis will be limited in the UK.

But if a big V6-powered petrol luxo-barge is the kind of thing you're after and you value comfort and refinement over a sporty drive, then the Genesis could well surprise you. It's spacious and absolutely loaded with kit, which all go some way to compensate for what initially looks like a steep £48,000 price.

Hyundai has clearly worked hard on the Genesis’ refinement, as it’s a quiet place to be a lot of the time. The 3.8-litre V6 is whisper-hushed at idle and only becomes intrusive when worked hard, while there’s also very little wind and road noise.

The standard air-suspension also does a fair job of soaking up bumps, floating over rough surfaces that would cause some rivals such as the Lexus GS to fidget. However, hit a ridge or a pothole, and an uncomfortable thump is sent shuddering through the cabin. This soft suspension set-up also has an impact on the Genesis’ handling.

Even with the dampers in their stiffest setting – drivers can choose between Sport and Normal – the Hyundai rolls through corners, while body movement isn’t that tightly controlled. It also has a confidence-sapping tendency to roll into oversteer under high cornering loads. 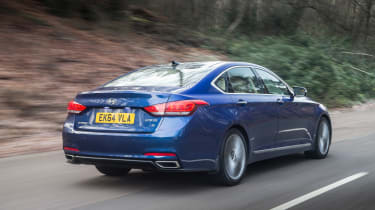 The electronically assisted steering doesn’t boost confidence, either; although it’s direct, it lacks feedback. Plus, it suffers from a sticky and imprecise action in the straight ahead position, which forces the driver to make lots of small corrections to keep the car in your chosen lane on motorways. As a result, the Genesis isn’t as relaxing over long distances as you’d expect.

The 3.8-litre V6 also feels out of place in a luxury executive saloon. The petrol unit is refined enough, but it lacks the effortless low-speed response you’d expect in this type of car.

Below 4,500rpm, acceleration is a little sluggish and isn’t helped by the slightly clunky and occasionally hesitant eight-speed auto box. However, work the powerplant hard, and the Genesis performs strongly. The sporty, snarling soundtrack is slightly at odds with the car’s executive image, but it's a sprightly performer when you put your foot down from a standstill.

Spending £47,995 on a car is a lot, let alone for a Hyundai with no track record in such an image-obsessed class. And while the Genesis feels better built and more upmarket than any of the brand’s other models, it’s not special enough to justify such a hefty price tag. Plus, it’s pretty expensive to run.

CO2 emissions of 261g/km result in large Benefit in Kind bills for business users, while private buyers have to cough up £500 annually for tax. The 3.8-litre engine is also very thirsty.

While our experts haven’t yet calculated residual figures for the Genesis, it’s unlikely to perform well. On the plus side, the car comes with a free five-year servicing package.

If imitation really is the sincerest form of flattery, then Germany’s big three will have been paid a great compliment by the styling of the Genesis. For instance, the Hyundai’s front grille and headlamps can be seen as a mish-mash of Mercedes S-Class and Audi, and the rakish profile is pure Audi A7. While it’s not the most imaginative design, the Genesis is handsome and well proportioned, plus it’s long and wide, so it looks quite imposing.

The copycat theme continues inside, where you’ll find a dashboard that bears more than a passing resemblance to the BMW 5 Series’. There’s also a centrally mounted infotainment screen and white-ringed dials, plus an almost identical centre console layout. Still, there are one or two flourishes that help the Hyundai stand out, including the neat, metal-finish starter button and the classy analogue clock. 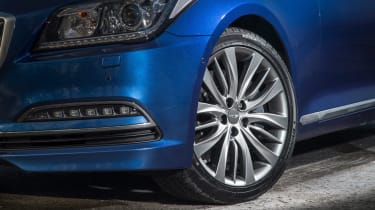 The quality is good, too. It can’t quite match the best executive cars for upmarket appeal, but the Genesis’ fit and finish is the best yet for any Hyundai. The plastics are all soft touch, the wood trim has a deep gloss finish and the stitching on the leather is neat and consistent.

There’s plenty of kit, including soft-close doors, a reclining rear seat with footrest, a head-up display and a surround-view parking camera system. There’s also a powerful, 14-speaker Lexicon stereo set-up, a panoramic glass roof and heated and ventilated seats front and rear. In fact, it comes so well equipped that there are no optional extras.

It’s not perfect, though. While the cabin is well finished by Hyundai’s standards, there are too many buttons and switches carried over from the brand’s more humble models.

The Genesis is a big car – at nearly five metres long, it rivals luxury limousines’ dimensions. As a result, it feels slightly more spacious than its main rivals, with rear seat passengers getting more leg and shoulder room.

The rear bench has a 60:40 powered reclining function, while passengers sitting on the left can remotely operate the front passenger seat to create even more legroom. 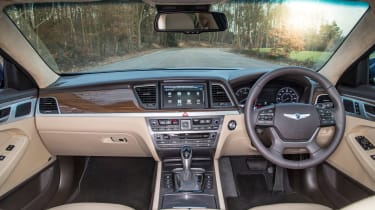 The only negative is that the standard panoramic glass roof eats into headroom, so even those under six foot tall will be brushing the roof lining.

The Hyundai has a powered tailgate, which opens to reveal a 493-litre boot; yet there’s no split/fold arrangement or a ski-hatch for longer items. Storage in the cabin is good, with a large cubby between the front seats, a useful glovebox and numerous cup-holders.

Hyundai can’t match the like of Lexus for a strong reputation for reliability and quality, but the brand finished our Driver Power 2014 satisfaction survey in a respectable 18th place. Plus, the Genesis represents a big step forward in terms of fit and finish, which helps create a strong impression of durability. And while much of the Hyundai’s underpinnings are new to UK buyers, they’ve been tried and tested in other models across the globe.

One area that shouldn’t be a cause for concern is safety. The Genesis comes packed with features, including seven airbags, stability control, blind spot monitoring, adaptive cruise control and lane keep assist – although the latter intervenes quite aggressively, which can be unnerving. 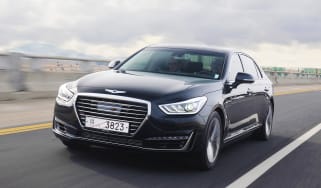 We get a first taste of Hyundai's premium brand, Genesis, in South Korea
Social climbers: Hyundai Genesis vs Lexus GS 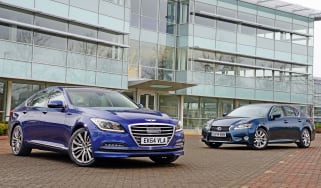 Hyundai’s new Genesis and the Lexus GS aim to shake up the exec elite. Do they make the grade?
Hyundai Genesis UK 2015 review 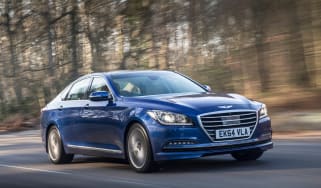 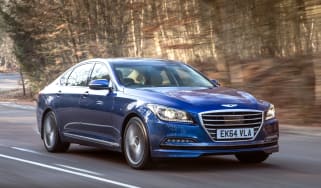 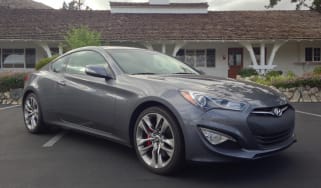 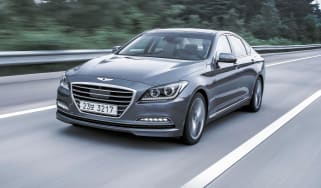