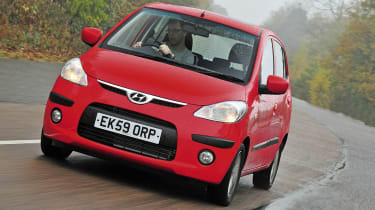 Hyundai enjoyed record sales last year – and on the evidence of the latest addition to our long-term fleet, I can see why! The i10 which has just arrived already feels more grown-up than the Suzuki Alto that preceded it.

Boasting a bigger engine, superior claimed fuel economy and more standard kit than the Japanese model, the Hyundai has firmly cemented its place in my affections. Our range-topping Style model even includes a leather steering wheel and electric sunroof.

There’s also an iPod auxiliary connector, but it’s the heated seats which have been the most useful feature so far – it’s surprising they’re fitted to a car in this price bracket, but they are extremely effective on cold winter mornings.

It’s not only on the inside where the i10 has impressed me: I’ve already been getting to grips with the red paintwork, too. In my capacity as consumer writer, I’ve used it as a test bed for numerous new polishes and waxes. And while the products have suffered contrasting fortunes, the paint always looks great. I also like the 14-inch alloys, as they perfectly suit the wheel-at-each-corner stance.

So the Hyundai has won over my heart – but it appeals to the head as well. A year’s road tax for the i10 costs £35 and insurance falls into group 11, so keeping one on the road isn’t going to break the bank. That’s partly down to the firm’s latest 1.2-litre Kappa engine, which is efficient (producing 119g/km of CO2 emissions) and spirited around town. With just over 1,000 miles on the car’s clock, I have few complaints so far. But the small tank does seem to limit the i10’s range, as it needs filling up more often than my old Suzuki. Unfortunately, the i10 has returned only 32.6mpg to date, probably due to my fuel-sapping commute.

In town, though, the Hyundai is in its element. The low waistline provides excellent visibility, and the tiny dimensions make squeezing through congested streets and into tiny parking spaces a breeze. The entry-level Classic starts at £7,760, but our Style costs an extra £1,090. I think it’s money well spent as this model features air-con, central locking and electric mirrors on top of the features mentioned earlier. Looking at the options list, ESP – which costs £355 – is the only glaring omission that could tempt me to spend any more cash if this was my own motor.

It’s the sort of equipment tally you would expect on a much bigger car – but the i10 is, of course, very small. And although it is large enough for most, at six foot eight inches, I sometimes struggle to get comfortable behind the wheel. My solution is to ensure that the shade for the glass sunroof is permanently retracted, freeing up a few millimetres of extra headroom.

My shorter colleagues will have no such problems – if they can prise the keys out of my hands long enough to drive the car for themselves!

The tiny dimensions ensure the i10 can be easily parked in tight gaps, but what surprised me most when I borrowed it recently was just how practical it is. The rear seats are simple to collapse forward, and they create a decent-sized boot. But as Jamie says, it is the heated seats which steal the show. They are a welcome luxury in a budget city car.