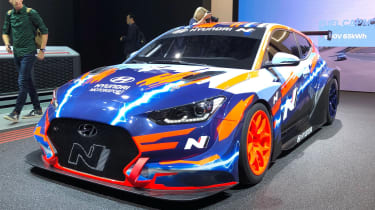 Hyundai took the wraps off an electric touring-car version of its Veloster coupe at the Frankfurt Motor Show.

After the Cupra ETCR, the Veloster N ETCR is the second car built to participate in the proposed ETCR series for zero-emissions touring cars, developed from the current hugely popular TCR rules for national and international touring-car racing.

Hyundai Motorsport, headquartered in Alzenau, Germany, already builds petrol-engined TCR versions of the Veloster N and the brand’s i30 N hot hatches for use by customer teams in series around the world. 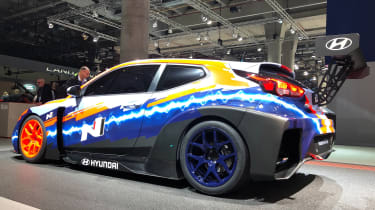 The Veloster N ETCR is fully electric, rear-wheel drive and has its motor mounted in the middle of the car for optimum weight distribution and handling. Design work on the car began in November last year and the first shakedown of a prototype model was completed in August. A full testing programme is set to commence later this month, and two cars will be produced initially.

Hyundai hasn’t released performance or power output figures for the Veloster N ETCR yet, but Cupra’s ‘e-Racer’, which is built to the same regulations, puts out 680bhp and gets from 0-62mph in 3.2 seconds.

Talking about the new car, the head of Hyundai’s product division Thomas Schemera said, “Through our successful Customer Racing division, we have spent many years honing our skills in touring car racing. ETCR is the natural next step in our journey, and one that aligns perfectly to Hyundai’s strategy for electric vehicles.”

Schemera added that the company remains committed to its i20 WRC and R5 rally car programmes, as well as the aforementioned conventionally powered i30 N and Veloster N touring cars.

It was initially announced that the ETCR series would get under way in 2020, but it’s now believed that just four events will take place next year, with the launch of a full championship put back until 2021.