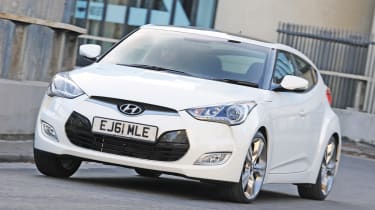 The Hyundai Veloster is one of the most distinctive cars on sale, thanks to its unusual 2+1-door layout. From the driver’s side it looks like a traditional three-door coupe, but if you walk around to the passenger side you’ll find a shorter front door and a rear door, which is intended to give it the practicality of a hatchback. There’s only one engine option, which is a 1.6-litre direct-injection petrol unit that develops 138bhp and is capable of going from 0-62mph in 9.7 seconds and on to a top speed of 125mph. These figures aren’t particularly impressive but the Veloster is good to drive, with secure handling and decent steering feel, too. It's also comfortable, and while the rear seats are only suitable for children, the extra door does mean that growing families can hang on to sports car dreams for that little bit longer. The Veloster Turbo model joined the line-up in September 2012, and is powered by the same 1.6-litre engine as the standard car but with 184bhp and 270Nm of torque. It has a starting price of just less than £22,000 and rivals everything from the VW Scirocco R to the Nissan Juke Nismo. A California-inspired convertible concept was revealed at the 2012 Los Angeles Motor Show. Called the Veloster C3 Roll Top Concept, it kept the standard car's quirky 2+1 door arrangement but added an innovative electrically folding canvas roof and a downward-folding tailgate. The roof can slide all the way back (just like the Citroen DS3 Cabrio) but it can also slide forwards, whereupon it sits above the windscreen and allows room for larger objects to be loaded into the back.

The Veloster is good to drive and handles quite well, but it's not about to upset the performance car order just yet. The steering is accurate and the ride is comfortable yet firm enough to create at least some illusion of sportiness. However, the 1.6 GDi petrol engine does struggle for power and isn’t the most refined unit around. Even the smallest VW Scirocco 1.4 TSI will outsprint it to 60mph and is much more refined. A twin-clutch automatic is available as an option, but there is no diesel option to choose from. The range-topping Turbo model is still not especially quick, but it does have 184bhp and 265Nm of torque, which is 33 per cent more power and 59 per cent more torque than the standard car. The steering has also been tweaked and the dampers stiffened for flatter cornering, which makes it more fun on a winding B-road.

This is one of the Veloster’s biggest strengths. The upside to its disappointing performance figures, is that the Veloster is actually impressively efficient. The 1.6 GDi Blue Drive model has an official fuel consumption figure of 47.9mpg and emits only 137g/km of CO2, which means it will cost very little to tax for the first year of ownership. Without the Blue Drive’s stop-start and low-rolling resistance tyres, the Veloster is still said to manage 44mpg and 148g/km. The Turbo model has an official mpg figure of 41 with CO2 emissions of 157g/km, but we managed just 25.3mpg over our week-long test. Plus, while the Veloster has a lower list price than the Scirocco, it will also be worth considerably less after three years of ownership. The residual value for the Turbo model is 42 per cent to the Scirocco’s 56 per cent.

With its swoopy shape and unusual 2+1-door layout, the Veloster stands out a long way from the rest of the Hyundai range. The trademark trapezoidal grille and swept-back headlights are there, but the low, nose-heavy stance gives it classic coupe appeal. The Turbo model is more distinctive still, with chunkier bumpers, a big gaping grille, lower side sills, central twin exhausts at the back and 18-inch alloy wheels. It’s a shame that the interior is so plain - it looks as if it’s been lifted straight from the i30 hatchback – but it has been built to the same high standards as the ix35 and there’s plenty of kit. Entry-level models come with 17-inch alloys, a seven-inch touch screen, climate control, parking sensors and Bluetooth as standard, while opting for Veloster Sport specification adds 18-inch alloys, black leather upholstery with heated front seats, cruise control and a panoramic sunroof. A media pack is also available and includes sat-nav a rear-view camera and seven-speaker audio system. Turbo models come with new seats, a seven-inch touchscreen sat-nav, upgraded stereo and Turbo badging.

At around 4.2metres long, the Veloster is the same size as the Scirocco but thanks to the extra rear door it’s actually more practical. Plus, unlike the MINI Clubman, the extra door has swapped sides for right-hand-drive markets like the UK. The boot is surprisingly big at 320 litres, which is eight litres more the VW but considerably less than the 380-litres offered by the Vauxhall Astra GTC. However, one design flaw is that when the rear screen is covered in rainwater, it gets dumped on the back seats when you open it - something your rear-seat passengers definitely won't appreciate. Space in the back is also tight, but there is just enough space for two adults to take a short trip in relative comfort.

The Veloster is still a bit too unusual to have made an appearance in our Driver Power customer satisfaction survey, but Hyundai has a strong reputation in this area and i30 is a previous winner. However, the brand finished only 14th in the 2013 results, having dropped seven places in 12 months. Owners still offered plenty of praise for its cars’ reliability, low running costs and in-car tech, but were disappointed by the lack of performance, harsh ride quality and poor handling. These faults aside, the Veloster feels very well put together, while the five-year triple care package should give added peace of mind. This includes a five-year, unlimited-mileage warranty, five-years roadside assistance and five years of free health check at Hyundai dealers. As for safety, the Veloster has a five-star Euro NCAP rating, with 96 per cent for adult occupant protection and 71 per cent in the safety assist category. Standard safety kit includes six airbags, Isofix child seat mountings and electronic stability control. 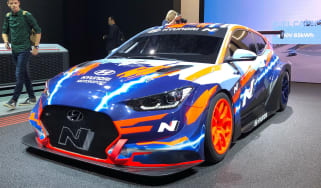 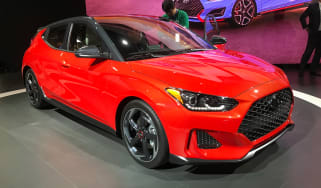 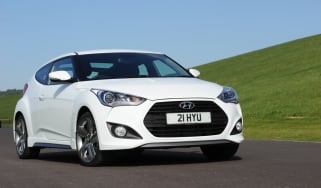 Hyundai Veloster coupe gets the axe 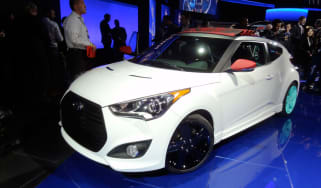 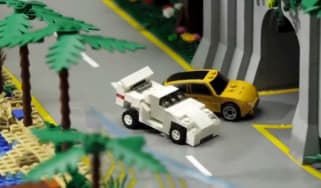 Hyundai has created a Need For Speed-style race using the new Veloster Turbo... and some Lego
Hyundai Veloster Turbo (2012-2015) review 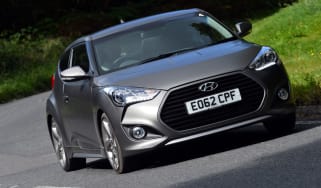 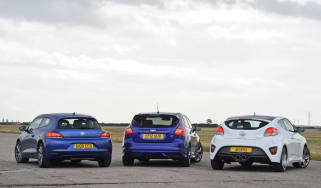 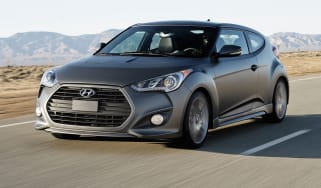 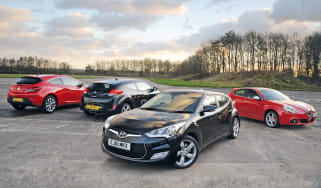 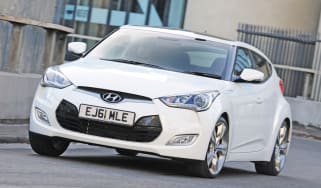 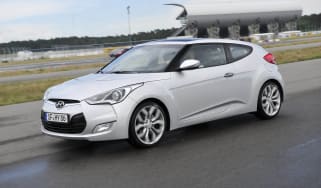 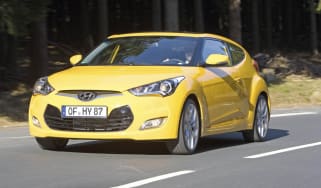