The three-door Vauxhall GTC comes with heavily revised suspension from the last Astra, and a range of powerful engines 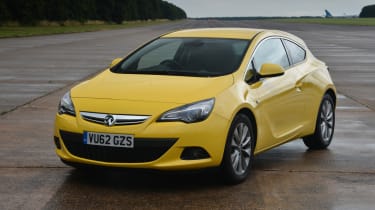 The Vauxhall GTC looks like a three-door version of the last-generation Astra, but Vauxhall has replaced almost every panel on the GTC. With sculpted lines and a high-set rear end, it definitely stands apart from the five-door hatch. The GTC takes aim at cars like the Volkswagen Scirocco and Renault Megane coupe – and, to help it compete, it’s not just its looks that have been made more striking. The driving dynamics of the standard Astra have been sharpened for the GTC, too.

It gets a bespoke suspension setup borrowed from the Insignia VXR to help improve handling. On the road it has plenty of grip and a neutral handling balance. There are four engines on offer, two petrol and two diesel, three of which come with stop-start as standard to help lower emissions. All-in-all it looks smart and handles well. But there are newer cars that offer similar strengths for less money. The excellent SEAT Leon SC follows a similar formula to the GTC in that it is a sportier version of the standard Leon. And Kia has followed suit with the Pro_cee’d GT.

As well as its looks, the driving dynamic of the GTC have also been improved over the Astra. A lower and improved suspension setup along with VXR-style struts at the front make the GTC feel a lot more planted and stable on the road. This is further boosted by the wider track on the GTC.

Vauxhall has spent time tuning the GTC specifically to suit UK roads, and the results can really be felt. There is plenty of grip and even on rougher surfaces it feel balanced and poised. Although the ride is firm, it's never uncomfortable, there's a nice balance between a focus on performance and comfort where neither seem to have been compromised. The standard steering setup does lack consistency, however, and could use more feedback, but the optional FlexRide damping system – when set in sport mode – improves things.

The GTC is not quite as accomplished as the Renault Megane coupe or quite as much fun as the SEAT Leon SC, but it’s still a decent performer. For the engine line-up, Vauxhall picked four of the most potent engines in the standard Astra range. There’s a choice between two petrols and two diesels. Power outputs range from the modest 109bhp 1.7-litre diesel to a rapid 178bhp 1.6-litre turbocharged petrol. All feel fairly quick, but you have to work the gearbox hard to make decent forward progress in the lower powered variants.

To help cut CO2 emissions and improve fuel economy, all GTC models apart from the most powerful petrol variant come with a stop/start system. That means that all of its engines are surprisingly efficient. The pick of the bunch would be the 2.0-litre CDTi model which offers the best compromise in terms of efficiency and performance, returning 57.6mpg and emitting just 129g/km.

The petrol and automatic versions are predictably less efficient, but the cleanest diesel emits just 119g/km – making it an excellent choice for fleet buyers. Other running costs should be fairly manageable, but if you go for the bigger wheels then replacement tyres may be pricer than you expect.

We first caught sight of what was then called the Astra GTC at the Paris Motor Show in 2011, and the production car retained all of its concept car looks. Apart from the door handles and the roof, every panel on the GTC is different from the standard Astra, and optional 19 and 20-inch wheels boost its kerbside appeal. Inside, things are a little more mundane.

Entry-level ‘Sport’ trim is very well equipped, but too similar to the standard car. The SRi version gets proper sports seats, a leather steering wheel, and brushed aluminium effect centre console which helps make it feel more special, although it’s not as well built as rivals like the VW Scirocco. The dash has also been lifted straight out of the five-door model and remains a little too cluttered with a mass of buttons and dials.

Buying a sleek three-door hatchback often came at the expense of practicality, but the GTC comes with the best of both worlds. Despite the coupe-like roof, space in the rear is very impressive. There's ample head and legroom for even the biggest of passengers and you'll have few complaints even on longer journeys. But the spacious rear doesn't mean boot space has been sacrificed.

With a 380 litre capacity, the GTC's boot is much bigger than the VW Scirocco’s, and with the seats folded down this increases to 1165 litres. The high loading lip is the only niggle, but the GTC is certainly roomier than you expect for a stylish three-door, and comfortably more practical than its competitors.

Although the suspension and stylish bodywork is new, the GTC’s engines and gearboxes have all been tried and tested in the standard hatch, and no major problems have been reported so far. Vauxhall’s reputation for reliability is improving with each new model it produces, and the interior feels well built.

A wide variety of safety features are fitted as standard, including ESP, electronic brake distribution, six airbags and SRi models get hill start assist too. Key optional extras include rear parking sensors and adaptive cornering headlights. It achieved the full five-star rating when it was crash tested by Euro NCAP, with an impressive 91 per cent in the adult occupant category. 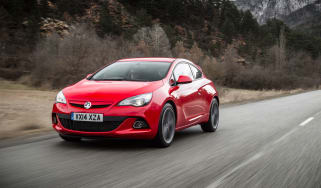 We get our hands on an the Astra GTC fitted with a new 197bhp 1.6-litre turbo petrol
New Vauxhall Astra VXR Extreme makes its debut 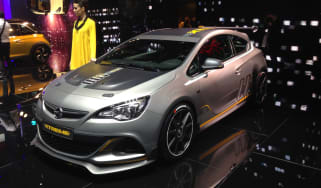 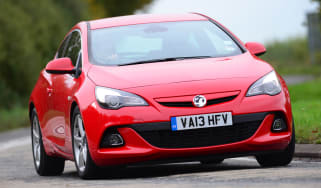 BiTurbo diesel is now available in the Astra GTC, so how does it stack up against the SEAT Leon FR?
Skip to HeaderSkip to Content