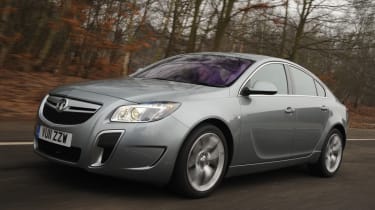 The Vauxhall Insignia VXR is an accomplished model from the performance sub-brand. Until now, the VXR badge has primarily been associated with hot hatches such as the Corsa and Astra. Fast and outlandishly styled, they have developed a cult following in the UK market. Meanwhile, the Insignia's predecessor, the Vectra VXR, boasted big power, but couldn't compete with premium German rivals like the BMW 335i and Audi S4 for desirability or handling prowess. The Insignia changes that, however, with a step up in quality and style matched by improvements in handling courtesy of four-wheel drive and clever suspension.

Excessive torque steer was one of the biggest complaints about the front-wheel-drive Vectra VXR, so the four-wheel-drive Insigna VXR has received a complete overhaul to ensure the driver can make full use of the 2.8-litre turbocharged V6 engine's 321bhp. The HiPerStrut front suspension, similar to the RevoKnuckle set-up used on the Ford Focus RS, helps eliminate any squirming through the wheel when you floor the accelerator, while the FlexRide system offers a range of settings to suit different road and driving conditions. So while the Insignia VXR is a very capable B-road tool, it's equally at home cruising down the motorway. However it never feels as fast or exciting to drive as its performance figures suggest and as a result leaves you feeling cut off from the driving experience. The steering is quite numb and inconsistently weighted and there is quite a lot of turbo lag from the big thirsty V6 petrol.

No two ways about it – the Insignia VXR will be an expensive car to run. Vauxhall claims combined fuel economy of 24.7mpg, and that's when you drive it in a sensible fashion. Take it to the track or stretch its legs on an unlimited German autobahn, and that figure will drop significantly. And if the big fuel bills don't make you think twice, steep annual road tax and Group 36 insurance premiums just might. The Vauxhall also won't hold its value as well as a BMW or Audi when the time comes to sell or trade it in so even though it undercuts those rivals you won't get that money back at the other end.

VXR models have always been about loud colours and aggressive styling, but the Insignia hatch tones things down a bit with a more subtle boot spoiler and more harmonious visual additions than seen on previous models. It wouldn't be a VXR without big alloys, however: 20-inch wheels are optional, while 19-inch rims come as standard. The Insignia VXR hatch also gets an aggresive front bumper and eye-catching chrome-tipped exhausts to reflect its significant performance potential. The design of the intakes is mirrored in the chunky metal steering wheel inserts, while the cabin features stylish and comfortable bucket seats for the driver and passenger, too. They come trimmed with part-leather as standard with the option to add a full covering. The driving position is excellent and the seats are very comfortable as well but the cabin feels a little dated now and the layout is quite confusing.

Throughout the Insignia range, the hatchback is a bigger seller than the saloon, and it's not hard to see why. Both cars look fairly similar, but the hatch offers the flexibility of a bigger boot opening, along with 530 litres of luggage space. That's enough to make the Sports Tourer estate (which is also available in VXR form) seem almost unnecessary. There's plenty of room in the cabin, too, although taller rear-seat passengers might find their heads brushing the roof thanks to the VXR's dramatic sweeping roofline. Also, the central seat in the back is only really suitable for small children. The fuel tank is quite large too but the lacklustre economy means the Insignia has a poor cruising range.

With a five-star Euro NCAP crash-test result and a 98th-place overall finish in our Driver Power 2013 survey, the standard Insignia is a top performer for safety but trails rivals when it comes to reliability. The VXR version shares these characteristics, with the added safety of more powerful brakes and the extra grip in wet or icy conditions thanks to its four-wheel drive. Occupants are well protected by six airbags and three-point seatbelts all round, while Isofix mounting points mean there's no compromising children's safety, either. A notable additional safety feature on the Insignia is directional headlamps, which turn in the same direction as the car to offer a better view around corners. 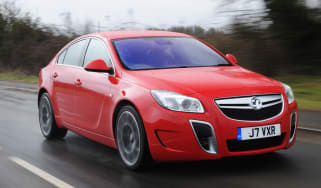