Our verdict on the new 170mph Vauxhall Insignia VXR SuperSport 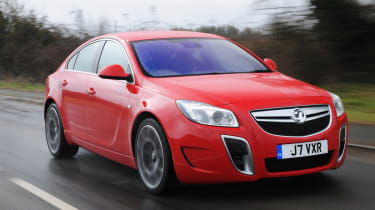 If straight-line speed is your priority, this Insignia won’t disappoint. The big engine and four-wheel-drive grip make it capable in all conditions, and it’s also comfortable. Yet the Toyota GT 86 proves a great driver’s car doesn’t need any of these things. And it’s the fact the VXR can’t match the sort of excitement the GT 86 offers that means it ultimately falls short.

It’s been four years since Vauxhall unleashed the Insignia VXR, so it’s decided to give the car a shot in the arm by removing the speed limiter and slashing the price.

The result is the Insignia VXR SuperSport, and the hefty £3,760 reduction means this powerful four-door saloon can now be yours for a little over £30,000.

Vauxhall has a rich history of performance bargains, and the Insignia uses a six-cylinder turbo engine, just like the 174mph Lotus Carlton of 1990. However, not much has changed as far as the 2.8-litre V6 is concerned – the absence of the electronic limiter is the only real difference.

So power output remains at a healthy 321bhp, with 435Nm of torque, and this is sent to all four wheels through a six-speed manual gearbox. Unleash it all on a long enough test track, and the SuperSport will keep accelerating until it hits a 170mph top speed.

To reflect this impressive figure – which is, admittedly, relatively pointless in the UK – the tacho has been redesigned.

Other tweaks are fairly modest, so apart from blue Brembo letters on the front brake calipers, there is little to distinguish the newcomer from the car that launched way back in 2009.

Fortunately, the shape still looks fresh, but it isn’t much different to a regular diesel Insignia – and that allows the SuperSport to fly under the radar, despite its potent drivetrain.

Look a little closer, and clues like the chrome-lined air vents in the bumper, subtle spoiler and twin exhausts all hint at the performance on tap.

The interior is starting to feel dated, with a button-heavy dash layout and solid but drab plastics throughout. Still, the grippy wing-backed Recaro seats are fantastic and you can almost fool yourself into thinking you’re driving a cut-price Audi S4.

It’s worth mentioning how much engineering has been deployed to cope with the power; the VXR uses the same HiPerStrut front suspension as the Astra GTC – splitting steering and suspension duties to reduce torque steer – and an electronic limited-slip differential.

All this technology means it represents fantastic value, but in truth it doesn’t translate to an exhilarating drive.

Throttle response isn’t as eager as you might expect considering the 5.6-second 0-62mph sprint time, and even when it does get going the V6 hums rather than roars.

The inconsistently weighted steering stops the car delivering the kind of thrills available in the similarly priced BMW M135i hatch. There’s loads of grip, though, and the Insignia feels planted even on soaking tarmac. So if you ever find yourself on a derestricted section of German autobahn, hitting 170mph won’t be nearly as scary as it seems.