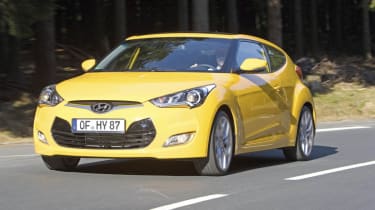 The cheeky Veloster has got what it takes to meet rival models such as the VW Scirocco and the MINI Cooper head-on. It’s compact, efficient and should be cheap to run. But it’s also a lot of fun, with decent steering and an agile chassis, and although the 1.6-litre engine is a little short on power, it’s smooth and engaging to use. The styling probably won’t convince everyone, yet the shape is surprisingly practical. With a feast of standard kit at a tempting price, the Veloster is one to watch.

Meet the sporty hatch that’s set to shake things up for Hyundai. Fans will remember the much-loved Coupé as the company’s last fun model – but the Veloster is altogether different. And we’ve driven it.

Rivalling models as varied as the Volkswagen Scirocco, Honda CR-Z and MINI Cooper and Clubman, the compact car is only 4.2 metres long – about the same as the VW. And while its chunky body shape and low roofline shout coupé, an extra rear door on one side adds practicality.

The Veloster certainly looks different and is Hyundai’s most distinctive car for a long time. It’s squat and square – and while our model’s violent yellow paint will split opinion, a quieter metallic shade should look great.

Inside, a six-footer can sit comfortably in the back seats, and the boot is surprisingly big, at 320 litres. That extra rear door (which will swap sides for right-hand-drive markets, unlike on the MINI Clubman) is odd, yet is useful for access.

The cabin is neatly laid out with plenty of legroom up front, but tall drivers will find their heads edging close to the rooflining. Even though the car seen here is a prototype, it all looks good and feels well made.

Impressive standard kit for the likely £17,000 asking price of the production model will include a seven-inch colour touchscreen infotainment system, complete with a media player connection, and a leather steering wheel that includes audio controls.

Out on the road, the Veloster is surprisingly good. The new 1.6-litre direct-injection four-cylinder petrol engine is great. With 138bhp and a mere 166Nm of torque, it doesn’t provide the pace of a MINI Cooper S, but has an energetic note and is peppy.

While Hyundai isn’t quoting any performance figures yet, we’d estimate 0-60mph in about nine seconds. The Veloster will be frugal, too. Again, there are no official figures, but 40mpg combined and sub-140g/km of CO2 seem very likely. A dual-clutch paddleshift gearbox will be available as an option.

Meanwhile, the chassis shows real promise. The dampers on our car were not to final spec and the model thumps a little over bumps, but the steering is beautifully balanced and weighted (if slightly short on feedback). The newcomer feels light on its feet, impressively agile, grippy and fun. A lot of fun!

There’s no doubt that the Veloster is shaping up to be one of this year’s most interesting cars. We can’t wait to drive the final showroom-ready model – on the basis of this prototype, Hyundai is on to a winner.

Rival: VW Scirocco 1.4 TSI A starting price of £19,570 highlights the Veloster’s good value. But the Scirocco is fine to drive, with top build quality. And for some, the badge will be enough to swing a sale.