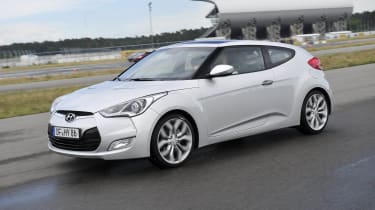 The Veloster seems to have all bases covered – it’s stylish, fun to drive, very well-equipped, and won’t cost the earth to run. The added practicality of the unique door layout means it’s a coupe that doesn’t demand any sacrifices either. We just hope Hyundai has the confidence to give it a little more power and really let the grippy chassis sparkle.

It’s over four years since the Veloster concept was first revealed at the Seoul motor show, and the production version is inching closer to making its full debut. We traveled to Germany to get behind the wheel of the latest prototype to see how its shaping up.

[[{"type":"media","view_mode":"content_narrow","fid":"69332","attributes":{"alt":"","class":"media-image"}}]]
Not everyone will be won over by the design – it suits brighter colours better than the silver car tested here - yet despite some fussy touches at the rear, the Veloster’s proportions are spot on, and the low, nose-heavy stance gives it classic coupe appeal.

There will only be a single engine offering in the UK, a 1.6-litre petrol sending 138bhp and 166Nm of torque to the front wheels via a six-speed manual gearbox.

A dual-clutch option will also be available from launch, and Hyundai claims the new transmission (a first for the brand) lowers tailpipe emissions, while improving acceleration characteristics.

The powerplant was chosen for it’s blend of performance and fuel efficiency – and although not the punchiest engine, it strikes a decent compromise between the two. However, it lacks torque in the middle of the rev range, which means it has to be worked hard to give its best, and can sound strained.

The company’s engineers insist that both a diesel and high-powered turbo version are being considered for the future, and we hope that’s the case, as the chassis certainly feels like it could handle some extra performance.

The ride and handling of these prototypes is in its final stages, and ride comfort has improved significantly over the mules we drove back in April.

The spring rates have been decreased, and the dampers firmed up, and even on the optional 18-inch wheels the Veloster feels more composed then before, even if the occasional jolt still intrudes the cabin. The changes may become part of a specific right-hand drive setup designed with Britian’s unforgiving tarmac in mind.

Combined with the excellent cabin refinement, the Veloster should be an accomplished cruiser too, and while the one-plus-two asymmetric door layout might take getting used to, it’s a practical addition, and with 60:40 folding seats and a 320-litre boot as well, the Hyundai is certainly more flexible than its rivals.

There are still niggles – there’s not enough headroom for driver or passengers, especially if you’re over 6ft tall, and the lack of a sportier engine note can make it feel a little lacking in character, but as an overall package the Veloster is shaping up to be a real contender.