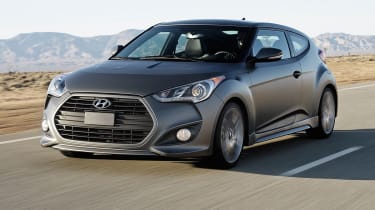 The Hyundai Veloster Turbo is a sharper handling and more attractive version of the quirky 2+1 coupe. However the car's mediocre performance and average cabin finish don’t really live up to the promise of its attractive exterior changes, and that's a real shame. And if an estimated list price of £23k proves accurate, there are faster, better quality and more enjoyable rivals available for similar money.

The Hyundai Veloster is designed as a more affordable rival to the likes of the VW Scirocco and the Vauxhall Astra GTC. The standard version didn't quite have the power to match its rivals, but Hyundai has now addressed this with the introduction of the new Veloster Turbo. Hyundai has given us the chance to get behind the wheel of a pre-production version.
The Veloster Turbo has its own look, with larger 18-inch alloys, a unique grille, bigger bumpers and a rear spoiler. There are LED projector headlamps and LED tail-lights, while the firmer suspension has been lowered, too. Of course there’s still the quirky 2+1 door arrangement, but the Turbo is easily the best looking model in the range.

Inside there’s more standard kit, with Hyundai’s Blue Link connectivity, a seven-inch touchscreen and a panoramic glass roof as standard. There’s a leather steering wheel and seats, which also have ‘Turbo’ lettering stitched into the backrests. Sadly, the driving position is set a little too high, with little room for a six-footer, while cabin quality can’t match its European rivals.
The turbocharged version of Hyundai’s 1.6-litre engine sees power boosted from 138bhp to 184bhp. This is less than the US-spec 201bhp Veloster Turbo, but that's no accident. Hyundai's engineers are proud of the fact that the European version has been specifically tailored for better low-end response. Changes to the turbo mean it cuts in much lower in the rev-range.
So is the Veloster Turbo a scorcher? In a word, no. The engine note sounds rather flat, and in a straight line it lacks punch, despite the additional turbo boost. The Veloster can’t match the similarly powered MINI Cooper S for response and thrills, and it can't match the Citroen DS3 Sport for involvement, because the Veloster’s six-speed manual has a notchy shift.
In the corners, the Veloster makes a better fist of things. Our pre-production car’s electric power steering wasn't set to the final calibration, but it wasn't far off, and had good feedback. The brakes were responsive, too.
Hyundai has proved that it can do polished and practical, but for the European market, it’s yet to offer a serious performance car. We think there's still room for a more potent version, because while Veloster Turbo is a start, it’s not a sports car, and it can’t touch any proper hot hatch.
The Hyundai Veloster Turbo arrives in UK showrooms in August from around £23,000.
Share this on TwitterShare this on FacebookEmail