The new Infiniti Q Inspiration concept car, which signals the future of the brand's design language, has been revealed in full at Detroit 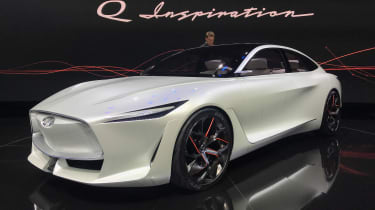 This is the Infiniti Q Inspiration concept. Revealed at this year’s Detroit Motor Show the mid-size saloon concept gives us a glimpse into the Japanese brand’s future design direction and how its next fleet of saloon cars could look.

But the Q Inspiration is more than just a slinky piece of motor show eye candy; beneath the skin the concept features Infiniti’s new variable compression ration engine technology (VC-Turbo) and a suite of autonomous pro PILOT driver safety systems.

Infiniti’s four-cylinder VC-Turbo engine first appeared in the new QX50 SUV and is capable of delivering V6 petrol levels of performance with the efficiency of four-cylinder diesel, according to the brand. It does this by continuously adapting the engine’s compression ratio - how far the pistons travel in the engine.

Its appearance in the Q Inspiration shows the brand’s commitment to the technology, according to the company.

Infiniti bosses have also said the premium saloon segment has become ‘rather conservative’, so the Q Inspiration is their answer to injecting a little more excitement into the segment. The stubby bonnet and elongated cabin are designed to maximize interior space, while coupe-like rear end and glass canopy means the concept does away with the conventional saloon three-box design.

A large grille flanked by strip LED headlamps dominates the front end, while the concept features much smoother surfacing than that seen on today’s Infinitis. Rear-hinged rear doors and the absence of a b-pillar has been designed to makes access easier for passengers. 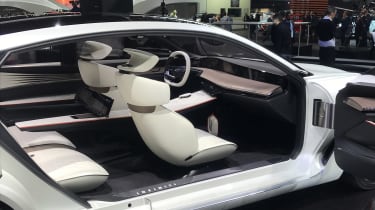 The Q Inspiration can seat four passengers inside, with each given their own floating touchscreen infotainment system. This allows passengers to watch a film, read the news or relax individually without distracting other occupants. As the VC-Turbo engine is relatively compact, space inside is more comparable to that of a large executive saloon, says Infiniti.

A leather centre console runs the length of the cabin, while the dash is made up exclusively of digital displays. Infiniti also says that the design gives us a further glimpse at what the interior of future models could look like.

Finally, a raft of pro PILOT autonomous driving technologies have also been adopted from parent company Nissan; the concept is able to independently drive on the motorway and manage negotiate junctions.

What do you think of the Infiniti Q Inspiration concept? Let us know below...