The new QX50 SUV has been unveiled in full at last, with Infiniti taking aim at the BMW X3 and Audi Q5 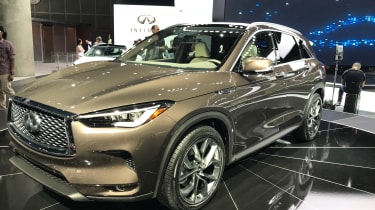 Infiniti is going after the likes of the BMW X3 and the Audi Q5 with its latest SUV – the new QX50, which has been revealed in full at the La Motor Show ahead of a UK launch late next year.

We’ve seen the car in concept form on a number of occasions, but the model you see here is the finished article, sporting a fresh design language, a new platform, new semi-autonomous driving tech and the world’s first variable compression ratio engine in a production car.

The SUV has made the switch from concept to production car relatively unscathed; the showroom model boasts the concept’s bolder, square jaw at the front with a clamshell bonnet, while the large grille and headlight setup are in tune with the latest Q60 coupe. 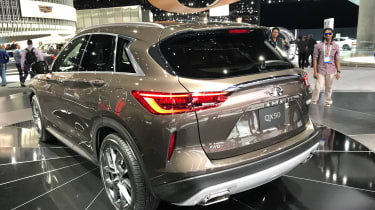 Elsewhere, the strong shoulder line and kinked window line at the c-pillar are transplanted directly from the design study, leading to an overall shape strongly mimicking the concept car’s shape.

Measuring at 4,693mm long, the QX50 is ever so slightly shorter than the new BMW X3, though it’s wider, taller and lighter than its German rival, with front wheel drive versions tipping the scales at 1,736kg. It’s underpinned by a new platform, developed with interior packaging and practicality in mind; Infiniti claims a maximum luggage space of 1,699 litres with rear seats dropped.

Arguably, the most intriguing aspect of the QX50 is the engine. It’s a turbocharged 2.0-litre four-cylinder petrol developing 264bhp and 380Nm of torque, which is intended to phase out the heavy 3.5-litre six-cylinder unit previously used by Infiniti. To achieve this hefty dose of downsizing it arrives with a unique party trick; variable compression ratio technology – a world first in a volume production car.

The tech is called VC-Turbo, and the engine’s compression ratio seamlessly varies from between 8:1 (for harder driving) and 14:1 (for fuel efficiency). This is achieved by continually altering the reach of the pistons, so technically, the engine varies from 1,997cc to 1,970cc in size.

Infiniti says it should be fast and frugal. All-wheel-drive models are said to take 6.3 seconds to get from 0-60mph, with a claimed top speed of 143mph. However, fuel economy figures have not yet been revealed. 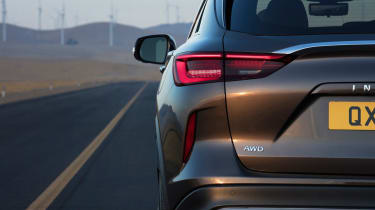 Both front-wheel-drive and all-wheel-drive versions of the QX50 will be offered, though both will make use of a newly developed CVT gearbox. For drivers who prefer to ‘shift’ gears themselves, eight virtual gears have been programmed into the XTRONIC CVT system. A spread of selectable driving modes can alter engine, transmission and steering settings on demand, too.

The optional all-wheel-drive system lies dormant most of the time, only sending power to the front axle. Up to 50 per cent of the car’s torque can be sent to the rear wheels, while the drivetrain also features torque vectoring to limit understeer.

Infiniti has raided Nissan’s war chest of ProPILOT driver assist features, with support for semi-autonomous driving as the headline act from a technology perspective. ProPILOT Assist means QX50 can drive itself in a single lane on motorways and in stop-start traffic, taking control of braking, acceleration and steering. Elsewhere, the new crossover is kitted out with autonomous emergency braking with pedestrian detection and a forward collision warning system, lane keep assist, blind spot assist, and adaptive LED headlights.

With a US market release scheduled for 2018, we don’t expect the QX50 to arrive on sale in the UK until the following year. Infiniti has yet to finalise UK specifications, but it looks set to go on sale priced from around or just above £35,000.

Do you like the look of the new Infiniti QX50 SUV? Tell us what you think about it in the comments section...