The van of the future: Iveco VISION concept revealed 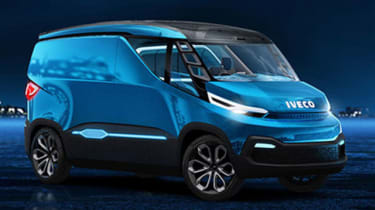 This is the Iveco VISION concept, shown at the International Motor Show of Commercial Vehicles in Hanover, Germany. It’s billed as a cutting-edge hybrid delivery vehicle showcasing the van manufacturer’s ambitions for the future of its commercial vehicle range. According to Iveco, it is “ideal for door-to-door delivery missions”, particularly in urban areas.

The VISION concept is centred around having as little impact on the environment as possible, with a ‘Dual Energy’ hybrid powertrain running on electric for urban situations, and hybrid mode for longer journeys. Overall, Iveco claims this will reduce consumption and CO2 emissions by up to 25 per cent.

• Most economical vans on the market

Iveco has paid particular attention to where it really matters, though – the loadbay. The VISION is equipped with a load management system which incorporates sensors throughout in order to identify goods and indicate where is best to position them. As well as this, there are containment devices in place to prevent packages moving in transit and causing damage.

The VISION is purely a concept for now, but it is believed some of the technology showcased is under investigation for possible use in Iveco products of the future.

The Iveco Daily van has been named International van of the Year 2014. Read our review here...