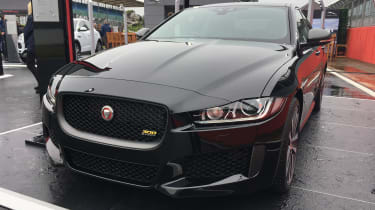 The special edition Jaguar XE 300 Sport has been seen in the UK in the flesh for the first time, making its maiden public appearance at the Speedmachine festival at Silverstone.

The limited run 300 Sport - which was announced last month together with the XF 300 Sport - marks the arrival of 2019 model year updates for both the XE and XF ranges.

In addition to the new special editions, Jaguar has fitted every XE and XF with the larger 10-inch Touch Pro infotainment system, as well as extra chrome switchgear, plusher carpets and a new auto-dimming rear-view mirror. 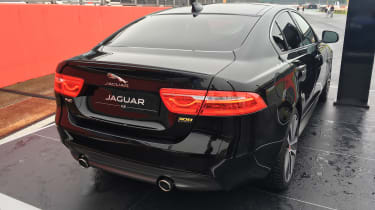 The XE 300 Sport uses the existing 296bhp 2.0-litre four-cylinder turbo engine, capable of 0-62mph in 5.5 seconds and 155mph flat out. Those interested in the larger XF 300 Sport get a choice of the same turbo petrol, as well as the torquier 296bhp V6 diesel. The XF 300 Sport is also available in Sportbrake estate guise.

All versions get dark satin grey detailing, 300 Sport badging and unique alloy wheels. The XF comes in a choice of three colours: Yulong White, Indus Silver and Santorini Black, while the XE is also offered in Caldera Red.

Inside, you’ll find unique yellow stitching on the steering wheel, seats and armrests, as well as branded sills, mats and headrests. Like the now defunct F-Type 400 Sport, both special editions will only be available for a single model year. 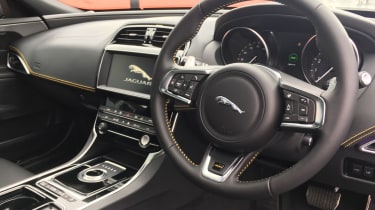 Jaguar has also confirmed its intention to remove the range-topping 375bhp 3.0-litre V6 petrol engine from UK price lists. Due to more stringent WLTP emissions criteria and low sales volumes, it no longer makes financial sense and has been withdrawn from production.

Are you tempted by the Jaguar XE and XF special editions, or does the price premium put you off? Let us know below…