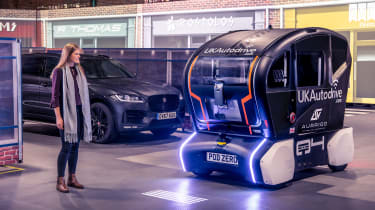 Jaguar Land Rover has developed a system that projects an autonomous vehicle’s direction of travel onto the road, informing other road users of its intentions. The system is being built as part of a research project into how people can develop their trust in autonomous vehicles.

The new technology is being trialled on a fleet of autonomous pods (supplied by Aurrigo). It works by beaming a series of “light-bar” projections onto the road, with the gaps between the light-bars being used to express the pods’ intended actions.

For example, the gaps between the light bars narrow as the autonomous pods decelerate, closing to a single beam when stopped. The light bars widen again as the pods accelerate, and fan out to either the left or right when the pods are cornering.

Trials were conducted last year by a team of engineers and cognitive psychologists, working at Jaguar Land Rover’s “Future Mobility” division. The research was in response to a recent study into the perception of driverless cars, which revealed 41 percent of drivers and pedestrians were worried about sharing the road with autonomous vehicles.

Testing took place on a fabricated street scene and based around a “trust trial” programme, with Jaguar’s engineers recording pedestrian trust levels after each encounter with an autonomous pod. In a bid to improve trust levels, Jaguar Land Rover even fitted a set of “virtual eyes” to each pod to see if making eye-contact improved trust in the technology.

The study is part of Jaguar Land Rover’s ongoing research into how humans and autonomous vehicle will interact in the future. Pete Bennett, Future Mobility Research Manager at Jaguar Land Rover said: “Just like any new technology, humans have to learn to trust it, and when it comes to autonomous vehicles, pedestrians must have confidence they can cross the road safely.”

Jaguar Land Rover is yet to confirm whether the technology will feature on any of its vehicles, but the company has confirmed that the research is part of its long-term goals of improving mobility and making cars safer.

What are your thoughts on Jaguar Land Rover’s “trustworthy” cars. Let us know in the comments section below...