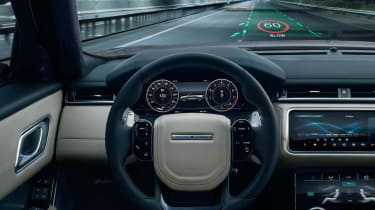 Jaguar Land Rover is developing a new 3D head-up display and infotainment system that could project real-time safety information onto the windscreen in front of the driver. In addition, the system could allow passengers to stream 3D movies.

As illustrated by Jaguar Land Rover’s images, the 3D head-up display system could project a range of safety alerts within the driver’s field of vision, highlighting navigation instructions, potential obstacles and lane departure warnings over the prevailing road conditions.

JLR hopes the system will improve the safety of its vehicles, allowing drivers to react more naturally to hazards. Valerian Meijering, one of JLR’s Human Machine Researchers, said: “Not only does [this system] provide a much richer experience for customers, but it also forms part of our Destination Zero roadmap, helping us move towards a safer future.” 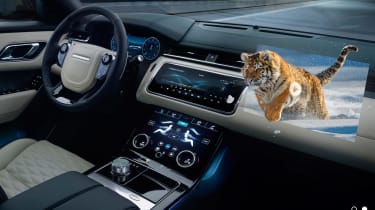 Development for the head-up display was green-lit in response to a series of studies conducted in Germany, which found that 3D displays in an automotive setting can improve both the driver’s reaction time and judgement of depth.

Added benefits of the head-up display system would include an increased amount of personalisation options for drivers and the opportunity for passengers to watch 3D movies. JLR says its system could incorporate head and eye tracking software to follow the user’s position, ensuring they can see the film without the need for 3D glasses.

The software could also be expanded upon once autonomous motoring is better established. Jaguar Land Rover envisions its 3D displays could be used to display personalised media to individual passengers, including journey details, points of interest and movies, regardless of their position in the vehicle.

What are your thoughts on Jaguar Land Rover’s 3D head-up display? Let us know in the comments section below…