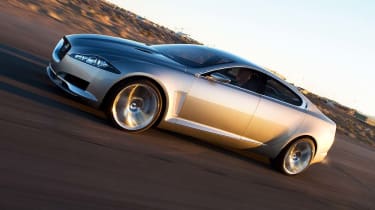 The new XF will mark a radical departure for the traditional British marque. With a bold look and a range of powerful engines to choose from, the model will have everything it needs and more to put Jaguar back on the executive car map. Getting behind the wheel of the C-XF has given us a real taste of what’s to come – and if the production car can match up to the standard set by this concept, the future for the Midlands-based manufacturer will be very bright indeed.

The sensational new Jaguar C-XF has been unleashed by Auto Express in an exclusive test drive. We took the wheel of the S-Type replacement to see if the executive has what it takes to leap to the top of the class.

While it's officially a concept, Jaguar is making no secret of the fact that the C-XF is only a thinly veiled version of the production-ready XF, scooped last week (Issue 947).

With the wraps expected to be pulled off the final model at September's Frankfurt Motor Show, it's clear that Jaguar fans have something very special to look forward to.

The four-door is set to take over from the S-Type in the range in January next year, and it marks a new beginning for the brand's design. Out on the road it's even more stunning; the XF concept's shape draws the eye from every angle. But the question is, does the driving experience deliver?

Pull the futuristic door handles and you can slip into the equally forward-looking cabin. The beautifully crafted one-spoke steering wheel sits in front of two paddleshift gear selectors - these allow the driver to take manual control of the C-XF's six-speed automatic transmission.

Push the illuminated starter button in the centre console, and the Jaguar roars into life. Under the bonnet, the firm's 4.2-litre supercharged V8 powerplant makes a familiar hum at idle.

This engine will be available from launch, although the hottest model in the line-up promises to be even more extreme. The 5.0-litre supercharged V8-powered flagship, the XFR, won't join the range until 2009, but it is expected to produce an impressive 480bhp and 700Nm of torque.

Rest assured, however, the standard blown V8 will still provide excellent performance. Blip the accelerator pedal, and the Jaguar produces an impressive bark. Drivers are given a choice of three dynamic modes. Controls in the centre console adjust the electronic suspension and gearing programmes, with a selection of Dynamic, Track and Launch settings. The C-XF has to make do with the standard mode, but put your foot down and acceleration is still thunderous.

From behind the wheel, the sharp feel reminded us of the maker's latest XKR, with immediate throttle response, direct steering and a truly distinctive growl from the engine. From the word go, the Jaguar sends out a clear message that performance will be high on its list of priorities.

Even though the new machine is based on the same basic platform as the outgoing S-Type, technicians are thoroughly reworking the suspension to ensure the XF delivers a far more involving driving experience.

To help keep the car's kerbweight as low as possible, body panels including the bonnet, doors and bootlid will be made of aluminium. What's more, the aerodynamics on the production model will be upgraded to improve high-speed stability. Among the modifications will be an upswept tailgate and underbody venturi channels to help reduce lift at speed.

Ready to take on German competitors at the top of the executive car class, the new Jaguar is likely to be available from around £30,000.

Standard equipment will be generous, with engineers adapting the touchscreen cabin control set-up first seen in the XK supercar. What's more, the manufacturer will aim to keep the uncluttered look of the interior, with a number of switches hidden under sliding panels, while a voice command system will also be available.

There's no doubt that the C-XF is one of the most exciting concepts of the year. We can't wait to see how it transforms into a showroom reality.