The X-Type was built to take Jaguar into the mainstream. The 'baby' Jag drew heavily on parent firm Ford's Mondeo 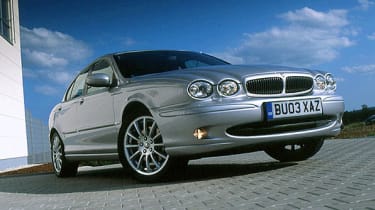 The X-Type was built to take Jaguar into the mainstream. Previously a maker of luxury and sports cars, the company saw the new saloon as its key to rivalling the BMW 3-Series. The 'baby' Jag drew heavily on parent firm Ford's Mondeo - but the four-wheel drive and V6 engines were exclusive. Conservative styling and a lacklustre interior let the X-Type down compared to rivals, so initial sales were disappointing. It took the launch of a front-wheel-drive V6 model and a 2.0-litre diesel to give the Jaguar a boost. On the second-hand market, diesel models are in short supply, and are highly prized as a result. The bargains of the range are the AWD V6 variants, which fetch as little as £8,000, while there are plenty of 2.5-litre cars available used - and these are a tempting upmarket alternative to the Mondeo.Checklist * Boot: many owners have had trouble with the boot lock sticking. This fault tends to affect early examples of the X-Type. Dealers have a fix for the problem, and it has been cured on later cars. * Interior: rattling or ill-fitting trim has been reported, particularly with the very first examples. If there is a touch-screen centre console, make sure all the systems work. * Gearbox: later autos are smoother, due to improved software. First and reverse gears on manual AWD models can be stiff when cold, but slicker once the car is warm. * All-wheel drive: AWD variants suffer transmission whine, while clutches fail at low mileages if abused. Check front tyres for excessive wear, which can signal misaligned wheels. * Engine: all powerplants in the X-Type line-up have proved reliable so far. However, the V6s are thirsty, and smokey high-mileage examples should be avoided.Driving Impressions The Jaguar X-Type boasts sure-footed handling, with front-wheel-drive models proving as impressive as the AWD variants. What's more, its precise steering is matched by an even ride. While V6 cars are strong performers, they need revving hard, which hits economy. The 2.0-litre V6 version is predictably lethargic, but the diesel is superb. However, the gearchange can be notchy, and some models are difficult to drive smoothly in traffic.Glass's View A combination of patchy demand for petrol versions and generous deal-er incentives has contributed towards the X-Type's low residuals. This is good news for used car buyers looking for value. Depreciation for the diesel version has not been as heavy, and prices are likely to remain stable for the short term, at least. Estates are also in demand, but stocks are low, so there won't be much scope for haggling. High-spec examples struggle to sell unless their prices are low. Jeff Paterson, senior editor, Glass's GuideLife With An X-Type I bought an X-Type because I had always promised myself a Jaguar. To be honest, I was a bit disappointed at first - it's a de-cent enough car, but doesn't feel quite as special as I thought it might. Douglas Kitchener, Grays, Essex This has to be one of the best used cars I have owned. Mine cost less than £10,000, and it's sensational - lovely condition, and so relaxing to drive. Mel Bernard, Wells, Somerset

This is Jaguar's 'mass-market' model to take on the class-leading BMW 3-Series. It's spacious enough to embarrass the firm's larger S-Type, while equipment levels are impressive. The chassis handles with all the refinement buyers in this sector of the market expect. Ride quality is also good, and certainly a match for the BMW. However, the V6s are not fuel-efficient enough. Throw in a jerky transmission, and it is clear why the X-Type doesn't top the class yet.