Looking for a small estate with a touch of class? Then the X-Type could be for you. Here's what to look out for 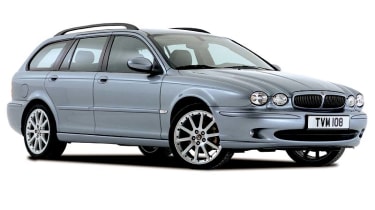 Purists may turn their noses up at Jaguar's first estate, but the Ford inspired load-lugger is all the better for its blue oval heritage - especially as a second-hand buy. Depreciation takes the edge off high list prices, and you still get the benefit of fine handling, a strong image and a four-wheel-drive option. Better still, the estate doesn't sacrifice luggage space for its looks. While bigger V6 models boast all-wheel drive, the base petrol and both diesels are front-drive only.Checklist * Alloy wheels: all models have alloys as standard. Classic trim has 16-inch rims, while top-spec cars get 17 and 18-inchers. There's a risk of the alloy wheel sticking to the steel hubs, so ensure there's a healthy layer of copper grease between them. * Centre console: one of the X-Type's big strengths is the generous tally of standard equipment, with air-conditioning included across the line-up. Touch-screen sat-nav on top-spec versions is also a doddle to operate. * Engines: if you're keeping an eye on economy, go for the 2.0-litre petrol or diesels. But if it's not an issue, the 2.5 and 3.0-litre engines are powerful performers, with 194bhp and 240bhp respectively. Don't expect more than 22mpg in town, though. * Gearbox: standard transmission for 2.0-litre petrol and diesel engines is a Ford-sourced five-speed manual, while the later 2.2-litre oil-burner gets a snappy six-speeder. If you want an automatic, you'll have to fork out for the big petrols. * Trim: the X-Type isn't as well screwed together as some rivals, with many owners reporting rattly trim and premature wear on the leather seats. Make sure that everything is securely attached and avoid light-coloured upholstery, as it marks very easily.What to look for The remote control key fobs for the central locking system are easily scrambled, so ensure that they both work - each car should come with two. Thankfully, if you're looking at a load-lugger, they will still be covered under warranty, because even the first estates are yet to pass their third birthday. Otherwise you'll be facing a £40 bill from a dealer for repro-gramming a single key. It's also worth checking the condition of the tyres on four-wheel-drive models, because they can wear quickly and unevenly.Prices The most affordable X-Type Estate is an early 53-reg 2.0D, with prices for good condition models from £14,000 at a main dealer. Garages outside the network could beat that, but official outlets will have the best cars. Automatics command a £1,000 premium.Recalls Mar 2003: Indicator fault warning may fail on cars built Jan 2001-Oct 2002. Oct 2004: Speed restriction sticker on space-saving spare wheel can come off. Affects cars built during Mar 2004. Oct 2004: Potentially faulty yaw rate sensor on cars built Feb-Mar 2004 fitted with stability control. Dec 2004: Modification to handbrake required on vehicles built Jan-Feb 2004. July 2005: Risk of short circuit on diesels built from Aug 2003-Aug 2004.Owner comment Clive Clark, a serviceman living in Germany, is very pleased with his X-Type. "Good handling makes it fun when the mood takes me," he said. "Yet it's comfortable on the autobahn at 120mph! It's the best estate I've ever owned."

The practical and stylish X-Type Estate is a worthy used buy, with its pair of diesel engines the most sensible options. Nearly new buyers can go for the 152bhp 2.2-litre unit, but the original 128bhp 2.0-litre oil-burner still provides reason-able performance and can manage more than 40mpg. The only flies in the ointment are the thirstiness of the V6 petrol units and the lack of a diesel automatic. But whatever you choose, the load-lugging X-Type will mean you stand out from the crowd. With the cachet of the leaping cat, it makes a sound alternative to the usual compact executive suspects. We like the smart styling, spacious boot, practical opening tailgate window and four-wheel-drive option. Watch out for dated interior looks, mature image, thirsty petrol engines, high running costs and lack of diesel auto.