We were the first magazine to reveal Jaguar's plans for the new X-Type Estate - now we're first to drive it. We climbed behind the wheel of the Coventry firm's first-ever production estate at a special test day to show off the abilities of an all-new ESP system developed by Bosch. 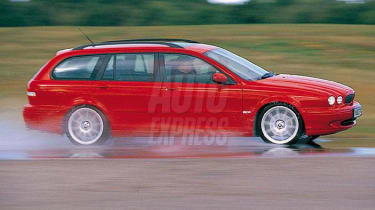 There's no doubt that the new X-Type Estate looks great, and feels very promising to drive. But will these factors be enough for the load-lugger to succeed? We reserve judgement until Jaguar has finalised the all-important cost and equipment details.

We were the first magazine to reveal Jaguar's plans for the new X-Type Estate - now we're first to drive it. We climbed behind the wheel of the Coventry firm's first-ever production estate at a special test day to show off the abilities of an all-new ESP system developed by Bosch.

The newcomer will rival the likes of the Audi A4 Avant and BMW 3-Series Touring at launch, and the car we drove was a 3.0-litre V6 prototype, with 18-inch alloys and Jaguar's performance Sport Pack. While the load-lugger impressed us at its Frankfurt Motor Show debut last month, in the metal at the test track we could see just how well the stylists have grafted on the big boot.

In many respects, the X-Type Estate has much greater road presence than the saloon on which it's based. Critics argue that, as with the four-door, the car doesn't look exciting enough. But we feel that in red, with colour-coded bumpers, it's a worthy class contender.

It's a similar story inside, where our vehicle was fitted out with leather and alcantara-trimmed bucket seats, plus a touch-screen stereo. Because this was an early prototype, we weren't allowed to take pictures of the cabin. However, the interior is very similar to that of the standard X-Type - although Jaguar has not created any more room in the back, so the rear seats still feel a bit cramped.

That said, you can't help but be impressed by the added load space on offer. With the split-fold rear bench lowered, the Jag has 1,415 litres available - that's 26 litres more than its nearest rival, the Mercedes C-Class. With the seats up, the X-Type boasts 445 litres; more than either the 3-Series or A4, but beaten by the Merc's capacity.

On the road, the car feels similar to the AWD V6 saloon - the engine spins eagerly through the range, while the five-speed auto, complete with its distinctive 'J-Gate', offers smooth and regular shifts. And despite the extra weight, the ride remains stable, while the steering and road-holding seem identical to the four-door's. We didn't get a chance to drive the Jag on the open road, but this estate clearly has real promise, and we look forward to pitting it against its rivals in a road test when it goes on sale next year.

However, key to the Jaguar's success will be astute pricing and kit, both of which are currently under discussion. And with rivals ever more competitive, a decision can't come soon enough.