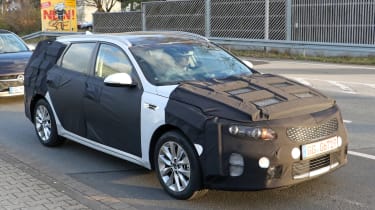 Kia is looking to flesh out its Optima range, with a new estate version spotted for the first time here in heavy camouflage.

The pictures show that the car won't be as sleek as the Sportspace concept from the Geneva Motor Show earlier this year, but Auto Express understands that the road car will share a name with the concept.

Kia's Sportspace will be the largest estate the brand has ever built, and it should feature the same large grille & headlights and the angled taillights from the updated Optima saloon. Of course, being an estate, there will be a much larger boot and this prototype is fitted with roof rails.

The addition of an estate will be part of Kia's plan to expand the Optima line-up, and within 18 months we should see a four-strong set: a saloon, estate, plug-in hybrid and finally a hot GT model. It'll feature a 2.0-litre petrol engine and could get over 250bhp. 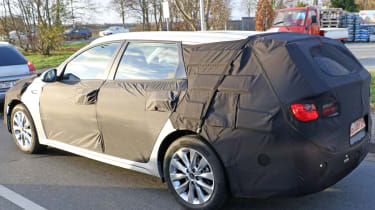 Inside, we expect the Sportspace to get the same interior as the new saloon, with two 'zones' - the upper section being for display functions and the lower section for the controls. An 8-inch touchscreen will provide the car's sat-nav and infotainment features.

The Sportspace will most likely be available with a 1.7-litre diesel with 139bhp from launch. In the saloon version this engine emits 110g/km, but there should be a slight increase due to the estate's extra weight. Although a petrol version could be offered internationally, we're unlikely to see it in the UK.