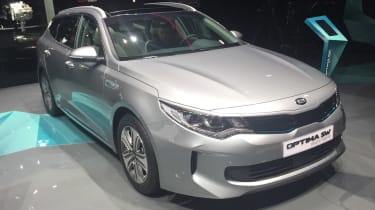 Kia's eco revolution continued apace at the Geneva Motor Show with the unveil of the new Optima Sportswagon Plug-in Hybrid. The stylish estate vied for attention on the Kia stand with the new Niro Plug-in Hybrid.

The Optima Sportswagon Plug-in Hybrid pairs a 11.26kWh lithium-polymer battery pack with a 50kW electric motor to provide a provisional pure electric range of 38 miles (60km). This compares to 30 miles in the new Toyota Prius Plug-in.

An emissions figure of 34g/km and fuel economy of 188mpg are being targeted by Kia, although these will be confirmed closer to launch in late summer. 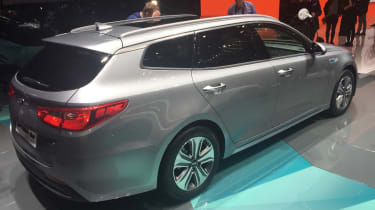 The electric set-up is complemented by Kia’s 2.0-litre four-cylinder GDI engine, which develops 154bhp and  189Nm. This helps to deliver a total output of 202bhp, with 0-62mph dispatched in 9.7 seconds. Power is transmitted to the road through a six-speed automatic gearbox.

Luggage space is down from the standard Sportswagon at 440 litres, as opposed to 552 in the standard estate, due to the siting of the battery pack under the boot floor, but this still compares favourably to the Prius Plug-in at 360 litres. With all the seats folded, the capacity is 1,574 litres. 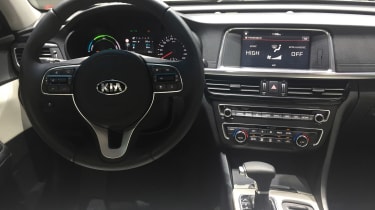 Inside, the dash is dominated by an eight-inch touchscreen which is compatible with Apple CarPlay and Android Auto, while there’s a new instrument cluster.

An array of safety equipment is fitted, too, including electronic stability control, lane-keep assist and autonomous emergency braking.

The Optima Sportswagon Plug-in Hybrid will go on sale in the second half of the year, with prices still to be confirmed.