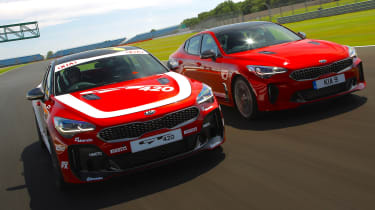 A few years ago, Auto Express drove an early prototype of a Kia designed to take on BMW and Audi at its own game in the sports saloon market: the Stinger GT S. According to Kia’s head of research and development, Albert Biermann (poached from BMW, incidentally), it was a car “that needed to surprise people” – and it did just that. It showed Kias could be fun.

Fast forward a few years, and the car that helped change perceptions of the Korean brand has received another injection of life. The Kia Stinger GT420 is a one-off track car created by Kia UK with help from sister company Hyundai and its European Technical Centre in Germany.

The story starts with that early prototype – the car that covered more than 10,000 development miles, with Biermann signing off the final calibration here in the UK on this very vehicle. Regulations state that pre-production cars have to be crushed when they’re finished with, but Kia claims it’s bent those rules, “an unfortunate and mysterious delay in creating the required paperwork” the reason for the GT420’s existence. 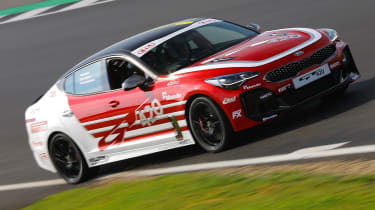 It’s a project that’s proved the passion for performance vehicles within Kia, and once the firm had sidestepped the regs, the skunkworks-style development team – led by Tyrone Johnson, previously of fast Ford fame – set to work on modifying the standard Stinger.

In the transformation to GT420, there’s been plenty of changes. The 3.3-litre twin-turbo V6 engine’s output was increased from 365bhp and 510Nm to 422bhp and 560Nm. That extra 57bhp and 50Nm of torque was liberated by two new K&N air filters, a lightweight Milltek Sport exhaust system with no cats, and a full remap, along with new HKS spark plugs for improved combustion. The team also fitted a bigger oil cooler for the car’s six-speed automatic transmission, which was recalibrated to give faster shifts in Sport and Sport+ modes.

The interior was stripped of pretty much all its trim – only the upper dashboard remains – with the electronic controls for the driver modes and the gearlever grafted onto the Stinger’s bare skeleton. Even though a big roll cage was bolted in for safety, the GT420 is still 150kg lighter than the standard car, with a clever and super-small battery helping save a whopping 22kg of that total.

The weight reductions were helped by the 19-inch OZ Racing wheels, which save 5kg per corner, and are wrapped in sticky Pirelli Trofeo R tyres. They cover big six-pot Brembo brakes at the front.

A bigger 25mm front anti-roll bar was added, while a 17mm anti-roll bar from a diesel Stinger was fitted at the rear to reduce the oversteer, because the car was very lairy in the development stages, according to the team. With more time for tweaking, it’s not as unhinged, with a balance that pushes into understeer in the quick corners around the International Circuit at Silverstone, where we drove the GT420. That’s no bad thing, since it gives you confidence to push a bit quicker, with the Stinger’s long wheelbase and extra grip from the Trofeo Rs giving plenty of stability. 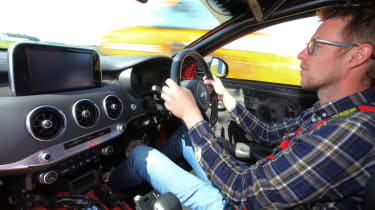 It’s reassuring on the brakes, with the hard stop from 140mph-plus at the end of Hangar Straight into Stowe, and into the slow hairpin at Village. In fact, with the reprogrammed ESC fully switched off, you can still coax the rear axle round in slow corners to neutralise any understeer and tighten the car’s line, steering it with the throttle.

The engine is strong at the bottom end and has a punchy mid-range. A back-to-back comparison with the Stinger GT S proves as much, but despite the raucous soundtrack from that very lightly silenced exhaust, it still isn’t the most free-revving motor. There’s also a bit of turbo lag to push through, and trying to modulate the throttle in a corner to trim your line isn’t the easiest because of the current calibration. However, we’re sure this is down to time and the finessing of the set-up. Likewise, the transmission is still not the sharpest; it’s sometimes hesitant on shifts, but given the base Kia had to work with, there’s potential here.

That’s a bonus, because due to the modifications that have given the Stinger more grip, the Kia’s steering is now the weak link. It feels vague and slow. 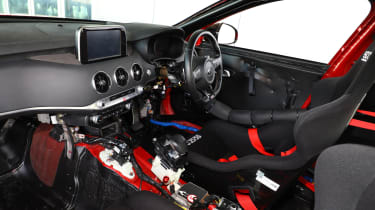 Despite the weight saving, the car also still feels its now 1,705kg kerbweight, but then it’s not been designed solely with the intention of lapping a track as quickly as possible. It’s also a showcase for the passion and know-how inside Kia when it comes to performance cars. The result is a car that features the same characteristics at its core as the Stinger GT S, only with that car’s level of ability ramped up by a good few notches in every area. One of those characteristics is fun, and the GT420 shows that.

The timescale has been short and the budget minimal; and given more resources in both departments, the team that developed the GT420 would have kept the adaptive dampers and fine-tuned them for greater control. It would be a case of refining and finessing what’s already there – almost as if this project could, theoretically, inform Kia’s performance cars of the not-too-distant future.

Despite much talk, there’s no concrete word on whether any of this will indeed help the development of Kia’s future hotter road cars. But with a Stinger facelift arriving in the next few years and the platform allowing plenty more to be unlocked, as the GT420 proves, never say never. It’s clear that the passion for these projects is alive and well inside Kia.

Would you like to see a more hardcore Kia Stinger in the future? let us know in the comments below and click here to read more of our features...