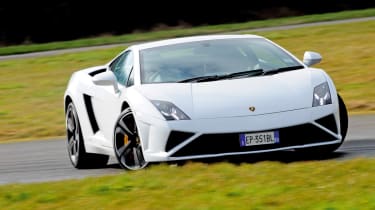 While this end-of-life facelift makes the Gallardo look even more dramatic, the design overall is less cohesive. And with no mechanical updates, the car is now less of a threat to Ferrari sales than it ever was. But driving one is still a delight – if not as rewarding as being behind the wheel of one of its supercar rivals.

A replacement for the Lamborghini Gallardo is expected within 18 months, but that hasn’t stopped the company from giving its entry-level model one final round of updates.

Despite its 10 years in service, the Gallardo’s striking bodywork still has the power to turn heads, so it’s a shame that Lambo has added some of the triangular design cues from the Aventador to the facelifted car. It proves that, sometimes, it’s best to just grow old gracefully.

What Lamborghini should have done is persuade fellow VW Group brand Audi to let it use the R8’s super-slick new S tronic dual-clutch gearbox. The single-clutch e-gear six-speed auto in our test car moves with all the fluidity of a skipping record.

Under hard acceleration, with the box in race mode, you could say the jerky break in torque as the cogs swap adds to the Lambo’s manic character. But there’s no excusing the motion sickness-inducing surges it produces when driving around town in auto mode.

And as there are no other mechanical changes, the car doesn’t have the finesse of the dynamically superior Ferrari 458 Italia and the McLaren 12C.

Even so, this ageing car can still excite, enthral and entertain its driver. Admittedly, the 5.2-litre V10 engine has no more power than before, but 553bhp is still impressive.

Driving a Lambo is always a sensory experience, and the all-wheel-drive grip and VW Group build give reassurance in their respective ways.

For some people, the Gallardo will still tick all the supercar boxes, but there’s no getting away from the fact that the old girl is due for retirement.