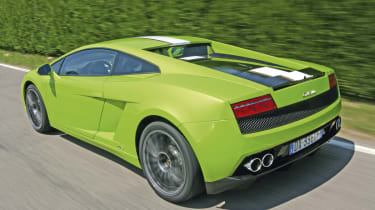 This car is simply amazing, and it’s been a long time coming. But better late than never. Ride and handling in the tricky bits is now right where it needs to be for the less typical (read: extreme) Lamborghini buyer. The mere fact that you are able to set up oversteer corner after oversteer corner with predictable control is enough to put a huge grin on your face. It’s exactly what we’ve been hoping for all this time. In a perfect world, the LP550-2 would be kitted out with the standard manual gearbox and optional ceramic brakes. However, it’s still incredible.

It’s been ten years since Lamborghini launched a rear-wheel-drive supercar – but with the arrival of the new LP550-2, the waiting is finally over.

Conceived in honour of the firm’s chief test driver, Valentino Balboni, each example also carries his signature and gets unique detailing, including a new range of colours and a dramatic white stripe that runs the length of the bodywork, Inside, there are special leather trims and a badge on the dash.

The car’s dampers and springs are also more rigid, and there’s a sturdier front anti-roll bar. Modified traction control settings are designed to allow greater stability at the limit.

While the four-wheel-drive LP550-4 Gallardo is impressive on the road, the LP550-2 version takes the thrill of driving one of these mid-engined models up a notch – and not only because of the new rear-wheel-drive set-up. Even at low speeds, this machine offers a more involving drive.

By far the most obvious improvement, though, is in terms of feel. The system is both direct and responsive. This is backed up by an ultra-stiff chassis that remains unflustered in even the tightest curves. Although the suspension is firm, it never feels stiff or unyielding, soaking up bends with ease. Throttle response is immediate – and under full acceleration, the car’s exhausts make a wonderful noise. The driver will be kept busy with the rifle bolt-action of the gearchange, too. The six-speed automatic e-gear transmission, fitted to our car, is optional, as Balboni specified that the manual set-up be standard. At his request, the car also gets metal, instead of ceramic brake discs – which although not as powerful – do offer a distinct price advantage.

Clearly, this evolution of the Gallardo is the most radical yet, but it promises to deliver unrivalled excitement. While the modifications made are best enjoyed on the track, there’s much more to this car than the reward offered at high speeds. In Corsa mode, the ESP doesn’t cut in now until the brakes are pressed extremely hard. Nonetheless, ESP can be switched off completely, too – vital if you want to drift the car through turns.

But if you want to buy one, you’ll have to be quick off the mark. Lamborghini promises that only 250 units of this spectacular car will be built.

However, the good news is that this is only the start of things for the rear-drive supercar chassis. We’ll be seeing a rear-drive model Gallardo and Murcièlago in the not too distant future.