Sensational Italian supercar nearly does it all - and wraps that considerable talent in a fantastic-looking body. A modern-day masterpiece 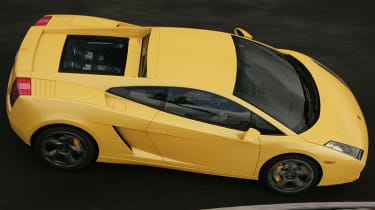 Driving: The way this machine drove amazed us. The 5.0-litre V10, mounted in the middle of the car, delivers astonishing thrust accompanied by an outstanding engine note. There's even an occasional blue flame bursting out of the tail pipes on the over-run! Performance of the Porsche 911 Turbo-challenger is thrilling, with the two-door coupe hitting 60mph in 4.3 seconds, and hurtling on to 193mph. But, unlike Lamborghinis of old, it's no rebel to drive - the Lambo's road manners are peerless. Steering, high-speed stability, traction and chassis balance are all superb. And wet roads hold no fear either, as the four-wheel-drive chassis is an exemplar of composure. In short, drama without the drawbacks.

Marketplace: The first true 'middleweight' Lamborghini in decades, the Gallardo is the fruits of much effort from owners Audi in making the Italian thoroughbred a viable proposition for more. With the Porsche 911 Turbo and Ferrari F430 in its sights, the dramatic coupe comes in just one trim, with either a manual or semi-automatic gearbox. A convertible version is on the cards, though.

Owning: The two-seater cockpit is probably the best-finished cabin ever from Lamborghini. Owners Audi have donated a lot of switchgear and know-how, so quality is high. But don't think it's a parts-bin special; dials, air con controls and switches have been integrated seamlessly. Besides, what better car to share instruments with, than an Audi A8! The sense of occasion is excellent too. From the steeply raked windscreen, low-slung bucket seats, exotic layout and Alcantara-clad steering wheel to the robust feel and decent visibility, the cockpit makes you feel very special indeed. It's practical too, and you can even raise the front suspension, to clear speed bumps. Running costs will be fearsome though. The engine averages just 14mpg, CO2 output is a massive 450g/km, insurance is stratospheric and servicing costs border on the obscene. It also costs over £120,000; but what a car for the money, and besides, by Lamborghini's standards, that's almost a bargain...