How to repair a cracked engine block

A cracked block is not necessarily the end of the engine. Ed’s diesel was saved by some careful stitching 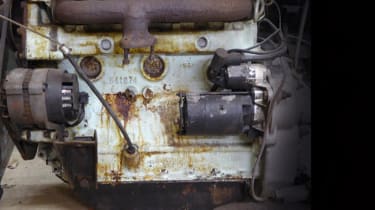 There are several ways for an engine block to become cracked. The obvious one is freezing in winter due to not using antifreeze or frequent topping up with plain water which dilutes the antifreeze. Blocks can also crack through overheating, and even impact – if a conrod breaks away from the crankshaft (catastrophic bearing failure or cambelt snapping) it will usually push a hole in the side of an engine block but, if it doesn’t, it’s wise to inspect the block to see if the impact has cracked it.

Early 2.25-litre blocks could also crack due to internal corrosion weakening the metal along the left side of the block,  usually from not renewing antifreeze regularly. When the Series models were current, antifreeze needed to be changed every two years – not for frost protection (old antifreeze will still not freeze), but to renew the corrosion protection that antifreeze provides.

This corrosion protection deteriorates due to the combination of heat and mechanical action (pumping) in the coolant, leaving the block’s coolant passages, and any aluminium parts, to be slowly corroded. This doesn’t apply to modern Land Rover engines where some antifreeze is serviceable for up to ten years.

An aluminium block is less likely to crack, because the material is more durable but it can be repaired by the process shown here. The later 4.0- and 4.6-litre Rover V8 engines can develop cracks in the walls between a coolant passage and cylinder liner.

This can lead to an apparently inexplicable loss of coolant because the coolant escaping from the crack seeps up the side of the cylinder liner and into the combustion chamber where it is vapourised and expelled from the exhaust without trace (though if the head is removed the piston crown and combustion chamber may be scoured clean by the action).

This technique cannot repair these cracks due to the shape and thickness of material, and lack of space. The cure for these is a flanged and sealed liner – a job for the V8 engine specialists such as ACR. Saving the diesel The crack we’re repairing here is on my Series III 2.25-litre diesel. I’d assumed it was caused by internal corrosion as mentioned, and I had lived with it for some time, experiencing slight coolant loss through the crack every time the engine was switched off and cooled down. 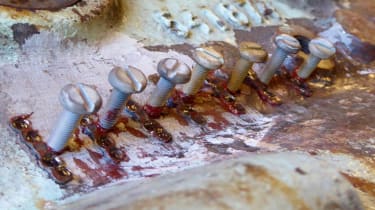 As a temporary fix I tried K-Seal HD, which is used to seal far heavier engines than this. It did seal much of the crack, but not all of it. Proper repair was one of those bigger jobs that I was putting off until I had time to rebuild the whole vehicle, which is now under way. I was desperate to hang onto this engine, partly to keep the vehicle original, but mainly because before the crack appeared I had rebuilt the engine with a reground crank, a rebore, and the new bearing shells and pistons that go with those jobs.

Camshaft bearings, timing chain, cylinder head and valve gear had all been overhauled and the engine had done only 3000 miles since. I had the option to rebuild these internal components into a spare 3-bearing block, though this would have needed a rebore to accommodate the oversize pistons of my cracked engine.

That’s when I contacted engine machinists Lancaster Engines to talk about the options and costs, and they recommended a guy who could repair the crack in my existing engine by metal stitching. Now, this is a long procedure, so it isn’t cheap, though the company I contacted came up with a fair and reasonable price of £460.

That was good value to me because having the crack repaired meant the Series III would be rebuilt with its original engine and, more importantly, it would save me a lot of time stripping this otherwise excellent engine and rebuilding its components into my spare engine block.

A great advantage of metal stitching is that it is done cold, so there is no heat to affect other parts of the engine. Having a crack welded involves completely stripping the internal components from the engine first, and then possibly needing the crankshaft and camshaft bearing journals line-bored to deal with any heat distortion. With some materials, post-weld heat treatment may be needed.

The metal stitching could have been done with the engine in the vehicle, albeit first removing the front wing and a few parts that would restrict access such as the exhaust manifold, alternator and starter motor. But having dismantled the vehicle, the engine was already out of the chassis so I also removed the transmission to make it more manoeuvrable in the workshop.

I’ll admit here, that I probably made a schoolboy error that may have led to the crack forming. A few seasons back, I had the Series III laid up in a shed over winter, and drained the coolant from the radiator bottom hose connection and from the drain tap on the side of the engine block to prevent freezing. When doing this, it’s good practice to poke a wire into the open drain tap to confirm it is not blocked, potentially still holding water in the block, and I remember doing this at the time.

However, when preparing for the repair work I removed the drain tap completely and, of course, the block was dry inside. Then I bent a stiff wire and poked it inside along the coolant passage. Eventually, crud came out, followed by water. So the block had not been fully drained back then, and the crack may, after all, be the result of frost damage. So there’s a lesson. If draining the engine when laying a vehicle up, it’s worth going to great lengths to ensure no coolant is being held inside the block by crud. The safest bet is to lay it up with fresh antifreeze solution inside.

On with the job

The repairs to my cracked block were carried out by Neil of On-Site Casting Repairs. He travelled to my workshop to do the work and he spent quite a few hours on it. 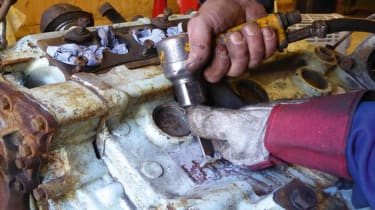 Before attempting a repair, it was essential to determine the full route and length of the crack using a magnetic particle test. The affected area of the block is cleaned off, and coated with a white background paint. A powerful magnet is placed across the crack at various points so that it creates a magnetic field across the suspected cracked area.

Fine magnetic particles (suspended in fluid) are then washed onto the area, and these collect where the magnetic field is interrupted by the crack, thus forming a black line along the crack, even where the crack was so fine that the naked eye could not detect it. 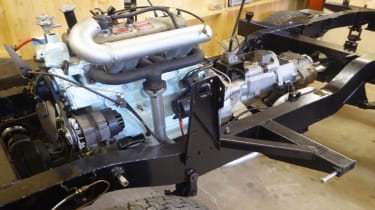 On-Site Casting Repairs, based in Rochdale, repairs all kinds of cast items: check the engine block and Fordson tractor repairs at www.onsitecastingrepairs.co.uk to see the extent of what can be done. It’s a cure for irreplaceable parts or, in my case, saving a good engine without dismantling it. Visit the website or call Neil on 01706 631253.

• This job can only be done by a specialist but, if you need to remove the engine or support the vehicle, ensure lifting gear is serviceable and correctly rated and that the engine or vehicle is securely supported • Ensure a safe working environment if the operator is visiting your own workshop and that electrical power supplies are safe