We help to build and take a spin in landmark SUV before it embarks on 8,000-mile trip from Birmingham to Beijing 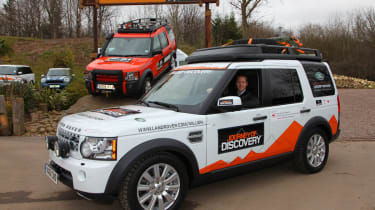 The 1,000,000th Land Rover Discovery has been produced at the Soliull plant in Birmingham, and we were there to put the finishing touches to the car on the production line and take it for a quick spin, before it was presented to the entire factory workforce.

To mark this epic milestone the landmark car will set off on an 8,000-mile 50-day journey today, from its birthplace in Birmingham to Land Rover’s biggest-growing market in Beijing, and Auto Express has a special role to play. The core driving crew will be four off-road experts from the Land Rover Experience, but we’ll be joining the expedition for the last leg, which arrives in Beijing on April 23 – just in time for the Beijing Motor Show.

The purpose of the journey is three-fold; to demonstrate the Discovery’s unparalleled durability, to retrace the steps of ‘The First Overland Expedition’ in 1955 - when a team of Series 1 Land Rovers set out from Birmingham to Beijing (but had to divert to Singapore instead because of political reasons) – and thirdly to raise money for charity.

Land Rover is targeting an ambitious fundraising total of £1,000,000 for the International Federation of the Red Cross and Red Crescent Societies (IFRC). The money will be used to support a water sanitation project in Uganda, and you can already make a donation at www.landrover.com/million.

To mark the occasion, Land Rover invited along a selection world-renowned explorers and self-confessed fans of the brand. These included Sir Ranulph Fiennes – the world’s most experienced living explorer, and celebrity survival experts Bear Grylls and Ray Mears.

Fiennes told us what made Land Rovers so special: “The only thing that used to go wrong was broken half-shafts. We would call ahead and get a new one parachuted in, and off we went again. You could use a coffee pot for a piston head – back then even a fool could fix one.”

Grylls is the proud owner of a 1974 Series 3, and explained why he chose Land Rovers for behind the scenes work on his TV show: “Land Rovers are synonymous with adventure – in tough moments you want something that’s rugged and reliable and that’s exactly what they are.”

We asked Ray Mears what his ideal off-roader would be like: “It would need to be comfortable with a good turning circle. In harsh wet climates a good heating and drying system is essential. It also needs to be easy to modify so you can tailor it to your precise needs – perhaps this is something that could be embraced even further with the new Defender.”

We’ll be bringing you regular updates and video diaries from the team as they travel through 13 countries en route to Beijing – through some of the most wild and remote regions on the planet.