Land Rover has marked the new Discovery Sport’s debut by launching a worldwide competition with Richard Branson’s Virgin Galactic spaceline. Running online from now until the end of October, the winning entry will see four lucky friends head into space aboard the $250,000-per-place VSS Enterprise spaceship.

The groundbreaking prize, worth a total of $1million (£601,500), was revealed in a short film featuring the likes of Sir Ranulph Fiennes and Bear Grylls, and coincided with the global unveil of the new Discovery Sport at Spaceport America in New Mexico.

To enter, wannabe astronauts must produce a 30-second video or a still image that demonstrates their spirit of adventure. Entries can be submitted at www.landrover.com/gotospace and the winning group of four will be announced this December, with Land Rover expecting thousands of submissions from over 40 countries during the next four months. 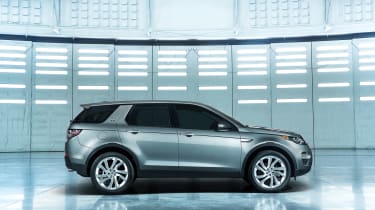 The contest further underlines Land Rover’s high-profile partnership with Virgin Galactic – announced at the New York Motor Show back in April – a tie-up that’ll include the use of Land Rover vehicles to shuttle commercial astronauts between the spaceport and spaceship.

The collaboration is also being used by both companies to inspire a future generation of engineers through Jaguar Land Rover’s Inspiring Tomorrow’s Engineers programme and Galactic Unite, created by Virgin Galactic.

Jaguar Land Rover’s group marketing director, Phil Popham, said: “Our heritage is rooted in adventure, exploration and a desire to go above and beyond, and nothing embodies this spirit of discovery more than a trip to space.”

The Land Rover Discovery Sport will replace the Freelander when it arrives in showrooms early next year, priced from around £25,000, and is the first model in a new three-strong Discovery range.