Once the diagnosis is done, replacing a Td4’s worn LP fuel pump is a relatively simple job 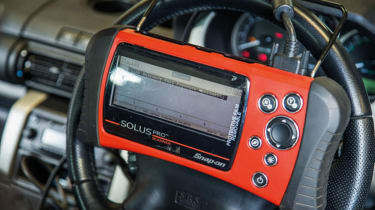 That’s the system we’re working on here. Of course, any problems with the pumps will cause issues with the running of the engine. Poor starting or reduced power problems are the classic symptoms that can be attributed to weak or failing pumps. The Freelander in this feature was no different.

Initially, it had a one-off starting problem, and later the inability to rev beyond 2000rpm, whereby the engine malfunction light came on. This situation continued intermittently for a couple of weeks or so, with some normal running, and gradually more incidence of reduced engine power. Literally, the low pressure pump could no longer supply the volume of fuel required to feed the engine at higher revs – hence the limp mode and warning light. A failing pump was suspected, and the illuminated engine light would have left a fault code that could be read by diagnostic equipment via the on-board diagnostic (OBD) port on the vehicle.

There are other clues though: switching the ignition on should trigger the pumps, which should be barely audible if in good health. On this Td4, the pump - located under the rear offside wheel arch - was clearly struggling, emitting a loud, low pitched groan as it struggled to move the diesel fuel. Eventually, it would fail completely, leaving the vehicle stranded and requiring recovery.

Fuel pumps on Td4 Freelander 1 and L322 Range Rover Td6 typically fail after 80k miles, though this can happen earlier if the fuel filter change isn’t carried out during services at the required 60,000 miles interval. Clogged fuel filters make the pumps work harder, hence the early failure; so changing the filter is an important service job.

Good practice means that, when changing a pump, the filter is also changed at the same time. Before disconnecting fuel pipes, clean the pipes and the connectors to prevent dirt entering the system. While disconnected, cover pipe ends and openings. James Holmes from IRB Developments shows how to do this straightforward job, which is perfect for a couple of hours of an evening or weekend. 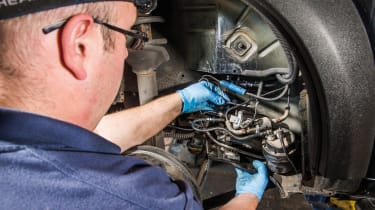 • Wear eye protection when working on the fuel system in case of pressurised fuel release.• Ensure the vehicle is securely supported on axle stands on a firm and level floor. With the one wheel removed, chock the remaining three wheels and engage gear and handbrake.

Click the gallery below for our handy step-by-step guide...