The Land Rover Freelander 3 is due in 2015, and our exclusive images show how it could look 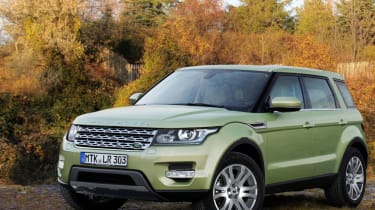 The new Land Rover Freelander 3 is coming in early 2015, but we can show you now what it could look like.

The new Freelander has some big boots to fill. Not only does it have to mirror the success of the current car – sales of which grew by 36 per cent at the start of 2013 compared with the start of 2012 – it also has to shine next to the company’s smash hit Range Rover Evoque.

Our exclusive image reveals how Land Rover will modernise the Freelander by taking cues from the top seller, while giving it rugged and practical appeal, too.

Setting the newcomer apart from the similarly sized Evoque will be a more basic and hard-wearing cabin, with tough plastics and more durable fabrics. The Freelander will also have fewer dashboard buttons than the model it replaces, thanks to a central touchscreen similar to that in the latest Range Rover.

Even though the new car has a similar footprint to the Evoque, Land Rover is certain the demand is there for both cars. It predicts that the global SUV market will grow from current annual sales of 14 million cars to 22 million by 2020. And the brand has come up with three ‘pillars’ with which to capitalise on this sales boom: luxury, leisure and dual-purpose.

Luxury is looked after by the new Range Rover, Range Rover Sport and Evoque, which are set to be joined by a long-wheelbase Range Rover and a seven-seater Evoque in the next two years.

The forthcoming Defender replacement is the dual-purpose model in the range, with the Discovery and new Freelander representing leisure. A Land Rover spokesman told us the company is always looking for areas of growth, so we expect two versions of the Freelander – with the five-seater in our picture set to be joined by a seven-seat version to appeal to US buyers.

Both models will be built at the Halewood factory on Merseyside, and they’ll use a scalable steel platform being developed at JLR’s expanded network of test sites in Germany, Dubai, the US and Sweden, as well as the UK.

The Freelander will benefit from the brand’s range of all-new four-cylinder petrol and diesel engines, which will be built at a new £500million Engine Manufacturing Centre in Wolverhampton, W Mids, from 2015. Land Rover claims these will deliver “class-leading levels of refinement and significant reductions in emissions”.

The Freelander is expected to be offered with the new nine-speed automatic gearbox, as well as the latest Haldex 5 four-wheel-drive system, controlled by a version of the automatic Terrain Response 2 system. An efficient front-wheel-drive model will again be available, but it promises to deliver much better fuel economy than the current eD4, which claims 47.1mpg.

When the new car hits dealers, it will be more affordable than the Evoque, which costs from nearly £30,000. The Freelander should start at around £25,000.