Hybrid SUV returns 85mpg and emits 89g/km of CO2, but is it worthy of the Range Rover badge? 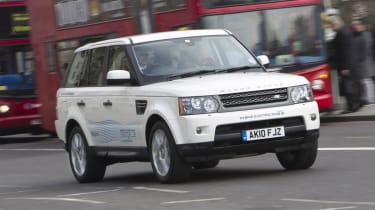 As a statement of intent, its hard not to be impressed by the Range_e. Ignore the jerky auto box, an obvious teething issue with this early prototype, and it has everything a typical SUV owner could need - power, refinement and off-road prowess. But when you consider the incredible fuel economy and rock-bottom emissions, it makes even more sense. And hybrid Range Rovers will become a reality when the next-generation cars begin to arrive next year.

Land Rover is serious about going green! In the last few months alone it’s introduced a two-wheel drive Freelander, a Range Rover Evoque with CO2 emissions of 129g/km and now the Range Rover Sport has gone hybrid. Called the Range_e, this fully-functioning test vehicle houses a plug-in diesel-electric powertrain and claims to be as capable as any other Land Rover, but with a fraction of the environmental impact.

The headline figures are astonishing. Using the familiar 242bhp 3.0-litre TDV6 engine working in tandem with a 94bhp electric motor, the Range_e can deliver combined fuel economy of 85mpg and CO2 emissions of 89g/km. Top up the batteries from your 240V household supply in just four hours and an electric-only range of 20 miles is possible. It’s exceptional fuel economy means a staggering 690 miles is possible on one 84-litre tank of fuel.

On our short test route we ran entirely on electric power, with the exception of two brief bursts from the combustion engine. One when we were climbing a steep incline and needed the extra power, and the second when we floored the the throttle to see what acceleration it was capable of. The transition from electric to diesel-electric power was perceptable, but smooth enough to be easily forgotten - much like a stop-start system.

With a total of 334bhp available - more than the 4.4-litre TDV8 available in the full-size Range Rover - it’s brisk for a car weighing over two and a half tonnes. The only downside was jerky changes from the eight-speed ZF automatic gearbox, but rough edges like this are understandable in such an early prototype.

Although we didn’t have the chance to take it off road, Land Rover assured us that the car’s legendary ability when it leaves the Tarmac has remained intact. That means there’s high and low ratios for the transmisson, as well as front, rear and centre locking differentials to tackle even the roughest ground.

This isn’t just a case of engineer’s showing off either, Land Rover has confirmed that it will launch it’s first full production mild diesel-electric hybrid in the next two years - on the all-new Range Rover. A more economical plug-in configuration like this will follow a few years after that - proof that SUVs don’t have to be gas-guzzlers to succeed.

RIVAL: Lexus RX450h This pioneering SUV is only available as a hybrid, produces 295bhp and emits just 148g/km of CO2. It can’t compete with the Range Rover and X5 for handling, but refinement is second to none. It’s expensive though, with prices starting from £45,250.