Land Rover has given the Range Rover Velar an update, with a new plug-in hybrid powertrain and an improved infotainment system 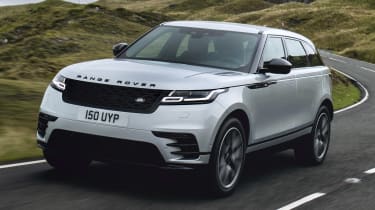 The Range Rover Velar has been updated for 2021 and now comes with the option of a new plug-in hybrid powertrain for the first time. The revised luxury crossover is available to order now, with prices starting from £46,110.

Cosmetic tweaks are few and far between, although JLR has added a subtly redesigned steering wheel, several new alloy wheel choices – in either 19-inch or 21-inch diameters – and some new paint finishes, including Hakuba Silver and Portofino Blue.

The Velar’s new plug-in hybrid powertrain is the same system found in the new Land Rover Defender P400e. It comprises a turbocharged 2.0-litre four-cylinder petrol engine, an electric motor and a 17.1kWh lithium-ion battery pack, which is mounted under the boot floor. 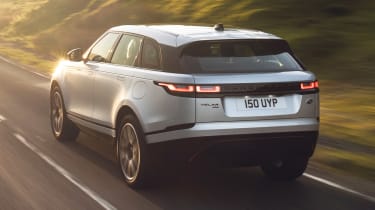 The system generates 398bhp and 640Nm of torque, which the firm says is enough for a 0–62mph time of 5.4 seconds. What’s more, providing the battery is topped up, the PHEV powertrain will deliver a claimed WLTP fuel economy figure of up to 130.2mpg and a maximum pure-electric range of 33 miles.

When plugged into a 50kW DC fast-charger, the Velar PHEV’s battery pack will recover an 80 per cent charge in just 30 minutes. The powertrain also supports 7kW AC wallbox chargers, although this method increases charge times to one hour and 40 minutes.

Alongside the new P400e PHEV powertrain, Land Rover has introduced a fresh pair of 3.0-litre straight-six Ingenium engines – both of which feature 48-volt mild-hybrid technology. Buyers have their choice of either a D300 diesel unit, which develops 298bhp and 650Nm of torque, or a P400 petrol engine, which has an output of 398bhp and 550Nm of torque.

The new straight-six diesel engine takes the place of the old Velar’s aging V6 – and it’s 7kg lighter than the unit it replaces. It delivers a 0–62mph time of 6.5 seconds and, thanks to an innovative exhaust gas treatment system, an emissions figure of 194g/km of CO2 which Land Rover says makes it one of the world’s cleanest diesel engines. 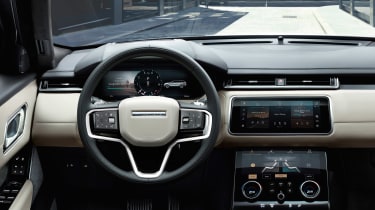 Finally, JLR has added a new turbocharged 2.0-litre four-cylinder diesel engine at the lower end of the Velar’s line-up, to replace the SUV’s D180 and D240 units. The new engine is 2kg lighter than its predecessors – and it splits the difference in performance, with an output of 201bhp and 430Nm of torque. It’s also optionally available with mild-hybrid assistance.

Inside, Land Rover has junked the old Velar’s Touch Pro infotainment system in favour of its new Pivi and Pivi Pro setups, which the company says were designed around ease of use. Both systems use the same 10-inch monitor and feature improved graphics and a new home screen that provides quick access to the driver’s most frequently used applications.

The infotainment system is paired with a 12.3-inch digital instrument cluster and supports over-the-air updates. Land Rover also promises it will make charging the new PHEV Velar easier, thanks to a function which can locate the nearest charging points.

Finally, there’s a more efficient cabin filtration system which Land Rover says can pull fine particulates, measuring just 2.5 microns across, out of the interior air. There’s a new active carbon included in the package, which also promises to oust unpleasant outside odours.

Click here for an in-depth review of the current Range Rover Velar... 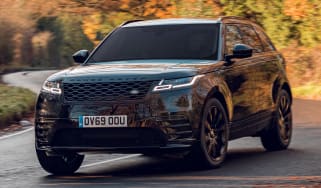