We take a trip up the Goodwood hill in the new Range Rover Velar. Watch the video...

The new Range Rover Velar is one of this year’s must have accessories, and just like in the world of fashion, Auto Express has tried it for size by taking it for a spin at the Goodwood Festival of Speed.

Referring to fashion when talking about the new Velar isn’t a step too far either. It’s easily one of the most hotly anticipated cars of the year, and arguably the most desirable car to ever wear the Range Rover badge. In fact, its coupe-like roofline, rakish profile, slim headlights and rounded-off rump cut a dash even in the exotic Supercar Paddock at Goodwood.

To be honest, the Velar cuts more than a dash – it’s absolutely mobbed. While the latest Lamborghini Centenario and mad Aston Martin Vulcan AMR Pro make small boys ecstatic with excitement, the Velar is drawing in a huge crowd. Even as we are setting up the car for some video, the Land Rover PR team are fighting off questions such as “How long is the waiting list?”, “How much is it?”, and “Can I have a go?” 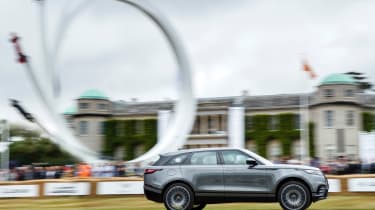 So it has all the style needed to make passers-by draw out their smartphones, but what’s it like on the road? Well, the road in question is the 1.16-mile Goodwood hillclimb that stretches past Lord March’s grand stately pile and up into the woods, before ending at the top of the South Downs. The course’s record lap time is famously held by F1 driver Nick Heidfeld who smashed through in a mind-boggling 41.6-second run back in 1999. That was in Mika Hakkinen’s F1 Championship-winning McLaren MP4-13, though.

We’re not going to be setting any records today. This run is about showcasing the new Velar to 150,000 onlookers - and as this is just a passenger ride, we’re going to have to wait a little longer to see what the Velar is like from the driver’s seat. But even riding shotgun it’s clear the Velar is shaping up very nicely indeed.

We’re in the range-topping Velar R-Dynamic HSE P380, which comes in at a cool £72,000. The Velar range starts at just under £45,000, however, undercutting the larger Range Rover and Range Rover Sport.

As we wait on the start line, the Velar’s ultra contemporary and stylish cabin is a sanctuary of peace and quiet. As the marshal waves us on, the Velar leaps forward; up front is Jaguar Land Rover’s glorious 3.0-litre supercharged V6 petrol engine, pumping out 375bhp.

With all-wheel drive the Velar absolutely rockets down the tree-lined avenue and before we know it, we are jinxing right, a short squirt on the throttle and into ‘Crossroads’. Just seconds later we’re blasting past his Lordship’s house, with the crowd-lined strip watching intently. The Velar’s turn of speed is quite extraordinary, and it’s helped along by a slick eight-speed ZF automatic gearbox. 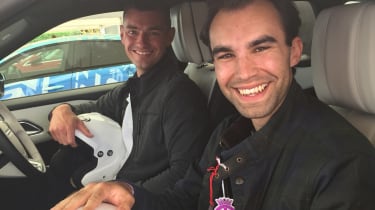 Under the bridge and now it’s time to think about braking for the infamous Molecomb corner. It’s a sharp left, but it’s made worse by the fact it’s off-camber and often very dirty. But even when our driver hits the anchors, the Velar feels planted and takes the tricky turn with ease. And then it’s back on the gas and up to Flint Wall, kink right, back into the trees, flash out into daylight for a second before plunging back into the forest. From here it’s throttle pinned to the very top.

No new record today but it’s clear this new Velar is the one of the dynamic cars to wear the Range Rover badge. It feels incredibly well sorted from the passenger seat, and we can’t wait to sit behind the wheel. We’ll be driving it in a few weeks time, before cars arrive in showrooms later this year.