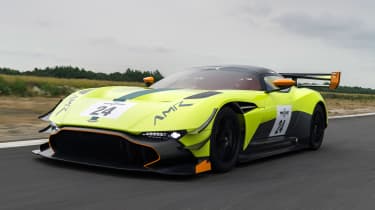 Aston Martin has revealed a new upgrade package for the hardcore, track-only Vulcan, releasing under the banner of the firm’s new AMR Pro performance brand.

Making its debut at the Goodwood Festival of Speed, the Vulcan AMR Pro package will be made available to all 24 current Vulcan owners, introducing an extensive aerodynamic package and a re-tuned gearbox.

It’s hard to miss the new aero work. The changes begin at the front end with new louvers above the wheel arches, while a quartet of dive planes has been added at the nose – two on either side of the car. Underneath, turning vanes have been added beneath the front splitter to aid steering response, while a new engine cover panel is 5kg lighter than the standard one. 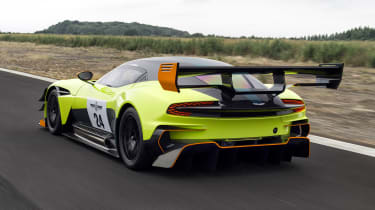 At the back, a new rear wing is found. It’s larger, featuring a second plane plus a 20mm Gurney flap. The rear wing endplates now feature new slots with 15mm Gurney flaps of their own. The result is a surge in maximum downforce, comfortably topping that of this year’s Le Mans class winning Vantage GTE. Aerodynamic balance has been improved too, shifting the centre of pressure closer to the middle of the car.

Under the bonnet sits the same 800bhp+ naturally aspirated 7.0-litre V12 engine, but elsewhere Aston has tweaked some of the mechanicals – the gearbox has been altered with shorter ratios, for punchier acceleration.

The AMR Pro upgrade package is fitted by Aston’s ‘Q’ special operations division, and the first of the Vulcan’s 24 owners have already taken the plunge. They’ll get to experience their upgraded track Astons in the autumn, while attendees at this year’s Goodwood Festival of Speed will get to see the Vulcan AMR Pro in action on the Goodwood hillclimb.

What do you think of the Aston Martin Vulcan AMR Pro? Let us know below...