We try the most powerful four-cylinder petrol version of the Range Rover Velar. Is it as sporty as its power output suggests? 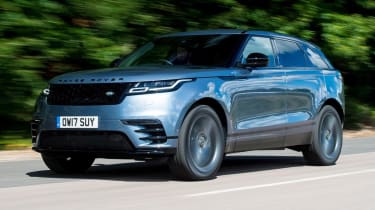 While the Range Rover Velar P300 will look attractive to buyers ready to ditch diesel, it doesn't quite make sense here in the UK. Yes it's quick, but the penalty you pay in terms of fuel economy means the diesel is still the better choice. If you're intent on a petrol Velar, then the P250 will be more than capable, offering just as many toys for less cash. There's no doubt that the Velar is a great showcase for Land Rover's latest tech and it sticks with Range Rover tradition by offering luxury and comfort, just don't expect it to also be a sporty drive.

It's fair to say that the new Range Rover Velar was a hit for Land Rover as soon as it arrived in showrooms. With its sharp looks and a cabin bursting with technology, it's one of the hot picks of 2018. But how well does the Velar stack up as a sporty SUV? We’ve tried the most powerful four-cylinder petrol Velar to see.

The Velar uses Land Rover's new naming structure, and this P300 features the firm's four-cylinder Ingenium petrol engine (hence the 'P') with 296bhp – or 300PS in metric horsepower. It's the same engine that appears in the entry-level Jaguar F-Type, and despite the fact this Velar is around 300kg heavier, its performance figures are quite similar. Land Rover quotes a 0-60mph time of 5.7 seconds and a top speed of 145mph.

On the road, the 2.0-litre model delivers good performance. The Ingenium motor is responsive, thanks to its 400Nm of torque being available from just 1,500rpm. Combine this with the slick-shifting eight-speed auto box, and the Velar has a decent turn of pace even with gentle throttle inputs. That's no bad thing, because if you extend the engine, it doesn't have as sporty the soundtrack you might expect. Thanks to the car's refined cabin, it's not noisy, but the four-cylinder thrum won't have you hunting for the rev limiter if you're shifting gear using the steering wheel paddles. 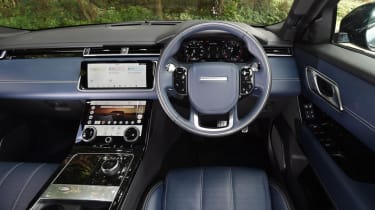 While the numbers might have you thinking that the Velar P300 is a sporty SUV, the drive will tell you otherwise. The HSE R-Dynamic model we tested had the standard steel springs, and while they do a good job of soaking up bumps - you hear big potholes more than feel them - it's not really designed with cornering in mind. Body roll is well controlled, but there's a softness to the damping that means the Velar tends to lollop around corners in a way that a Jaguar F-Pace or Porsche Macan does not.

Push harder and it feels like the Velar's suite of electronics are putting in a lot of effort to keep the car on the road. A high centre of gravity means it's no sports car in the corners. And while it might be tempting to replicate the wheel-cocking images seen when the Velar debuted at the Goodwood Festival Of Speed last year, the various tugs and jerks as the brakes or drive is transferred to each corner of the car, means it's not very pleasant. 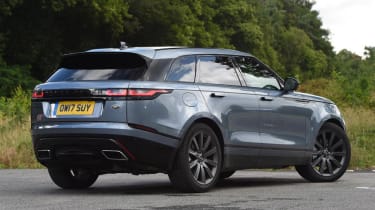 The rotary Terrain Response controller on the centre console allows you to select a sporty R-Dynamic driving mode, but it makes little difference, save for a slightly sharper throttle and heavier steering. It's better to leave the car in Auto and let the electronics take care of things – and as long as you're not pushing the car hard, the Velar is a perfectly hospitable and comfortable SUV.

Our car featured the Velar's trademark double touchscreen centre console, and while it's a magnet for fingerprints (stick a microfibre cloth in your glovebox if you want to keep it clean), they work well and are responsive to the touch. Space inside is good for five, too, while the quiet and refined cabin makes the Velar a comfortable and relaxing cruiser.

However, this HSE R-Dynamic P300 starts from £67,500, which is a bit steep. You wouldn't feel short-changed by choosing the standard car, though, and you could save a couple of grand if you went for the slightly less powerful P240 – or indeed, one of the diesels.