Does the entry-level Range Rover Velar D180 offer more for your money than the more expensive variants? 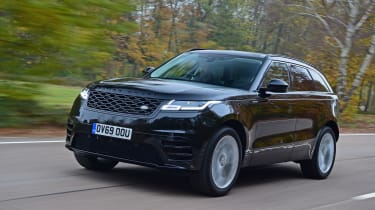 Avoid the more expensive trim levels and the cheapest Velar in the range is certainly not without appeal. Regular motorway users could do far worse than pick its blend of comfortable ride, cruising refinement and long-distance range. But for those who regularly drive around town, the petrol model is probably a better bet – and once you switch to that fuel type, Porsche’s Macan becomes a rival with just as much badge appeal and more engaging dynamics.

The Range Rover Velar was launched in 2017, but only now is the mid-range member of the British brand’s luxury SUV family really finding its feet. To start with, the car’s pricing was pitched relatively high, but while you can still spend a lot of money on a Velar, there are more modest variants that could make more sense for many customers. This, then, could be the pick of the range: the entry-level Velar D180.

The 2.0-litre Ingenium diesel motor produces 178bhp and 430Nm of torque - enough for respectable performance figures of 0-62mph in 8.9 seconds and a top speed of 120mph, and more than respectable efficiency numbers of 48.7mpg and 152g/km. You get an eight-speed automatic gearbox as standard – no manuals in the range, remember – and four-wheel drive.

For this, Land Rover is asking £45,260 - or a rather more ambitious £55,870 if you choose the sportier R-Dynamic SE trim level we’re testing here. The trim level brings 20-inch alloys, heated leather seats, power folding and heated door mirrors, an upgraded infotainment system, cabin flourishes and extra safety kit. The entry point looks more realistic to us, especially when it costs only a few pounds more than BMW’s X4 xDrive20d M Sport, which has the Range Rover licked on performance and efficiency - but not off-road capability.

Fire up the Velar for the first time and you’re unlikely to be in any doubt on which fuel you’ve chosen. The Ingenium motor has an audible twang when idling from cold - and truth be told, even when warmed up, the Velar has more of a conventional diesel chorus than we’d like. Try to hustle the car and you’ll have a soundtrack that’s some way short of the car’s sophisticated looks and cool cabin - not helped by a gearbox that, while smooth, isn’t all that snappy. It’s particularly prone to delay when you come to a halt at a junction and want to make a quick exit.

Once you get up to speed, though, the experience is much more palatable - more in keeping with that plush character, in fact. The Velar is a very refined cruiser, with wind and engine noise well suppressed and the engine much more polite when it’s not being stressed. Even on our car’s optional 21-inch wheels, there wasn’t a great deal of road noise to speak of.

Those jumbo alloys don’t help the Velar’s levels of comfort but there’s still enough compliance to dial out the worst road imperfections. You can upgrade the standard suspension to adaptive dampers, but air suspension isn’t available on the D180 at all, even as an option. Even so, at low speeds around town - where lots of Velars will get most of their use – you’re unlikely to be jostled about. We’d imagine the conventional 18-inch rims would be even more sympathetic, too. 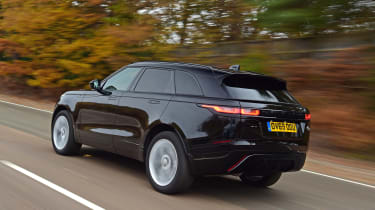 This focus on comfort does bring a trade-off in handling, though; the Velar isn’t quite as sharp in corners as the X4, and it wouldn’t be anywhere near as much fun on a back road as the (admittedly petrol-only) Porsche Macan. If you want that ability, the JLR policy would be for you to go next door to your Jaguar dealer instead and ask about an F-Pace.

The Velar’s cabin can’t quite match a full-spec Range Rover for accommodation, of course – but there’s much more space than in the baby Evoque. The Velar is also kinder to rear-seat passengers than either the X4 or the Macan. The boot is a useful size, too, at 558 litres, or up to 1,731 litres if you fold down the second row. Both of these capacities are comfortably north of the X4’s load bay.

The Velar’s dash has the latest version of Jaguar Land Rover’s infotainment system, with a split-screen layout that’s adaptable to content but still not quite as easy to use as it would be with a few more physical controls. Still, at least the displays themselves are crisp and reasonably quick to respond to inputs - and Land Rover has gone from being a smartphone pariah to find itself forging ahead of BMW in offering both Apple CarPlay and Android Auto.

Based on our drives over a mix of country roads, rush-hour urban crawl and fast motorways, you can expect to get something close to 40mpg out of the Velar - not a bad figure and well in line with the WLTP estimate of between 37.8mpg and 42mpg. It’s further proof that anyone who frequently tackles long journeys can still be better served by diesel – not just on economy and running costs, but also through the convenience of greater range.