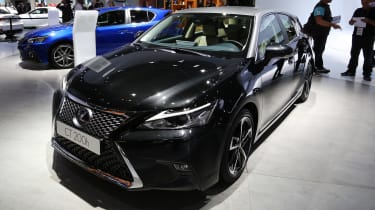 Lexus has announced its updated CT 200h hybrid is on sale now with prices starting at £23,495.

The 2018 edition was first unveiled at this year’s Frankfurt Motor Show revealing minor design tweaks to the existing model. The main revision to the 2018 CT are the revised trim levels, which have been simplified to six variants across the range.

Starting at £23,495 is the SE model, featuring 16-inch alloy wheels, reversing camera, six-speaker audio and seven-inch touchscreen as standard. The SE Plus Pack costs an extra £1,500 and adds 17-inch wheels to the CT along with rear parking sensors, Lexus’ Safety System+ and its own navigation system.

The CT 200h range is topped by the F Sport Premier Pack at £31,245, where you get F Sport-themed leather interior with heated door mirrors that fold and dim automatically. LED headlights, keyless entry and a 13-speaker surround sound system from Mark Levinson also feature in the Premier Pack.

Performance of the facelifted CT 200h remains the same, with the 134bhp 1.8-litre petrol-hybrid engine staying put across the trim, returning 88g/km CO2 emissions and fuel economy of 74.3mpg. 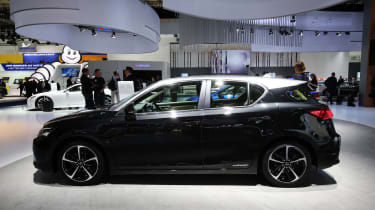 From the outside it’s difficult to spot the difference between old and new, but the car’s face has been refreshed with a new signature spindle grille, boasting a new mesh. All models now get this F Sport style grille and front bumper, alongside new metallic grey fog light housings and tweaked daytime running lights that now sit above the main projector bulbs.

Around the back, the LED taillights get a new L-shaped lighting signature, while the tailgate is more aggressively styled. The lower part of the rear bumper has been painted black and silver, and has been subtly reshaped too. Finally, new wheels ranging from 15 inches to 17 inches in size are available, and new paint finishes make the options list too.

Given that all cars now receive the F Sport grille, Lexus has introduced an exclusive grille mesh for this model to differentiate it from the rest of the range. The fog lamps get a sporty makeover too, with mesh styled housings. Black trim pieces are found dotted around the car’s front and rear, and exclusive to F Sport interior colour combinations appear in the cabin. 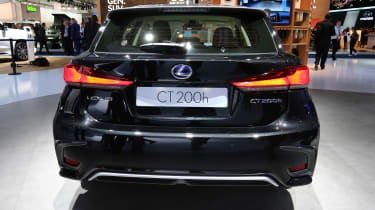 What do you make of the refreshed Lexus CT 200h? Let us know in the comments...