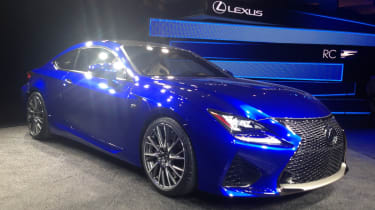 The new Lexus RC F coupe has been officially unveiled at the Detroit Motor Show – the 25th anniversary of the arrival of the Lexus brand. The car will also relaunch the Lexus ‘F’ performance brand by becoming the first F-badged Lexus since the IS F saloon was discontinued in 2012.

The RC F is due on sale early in 2015. It’s based on the RC Coupe revealed at the Tokyo Motor Show last year, and is a two-door version of the latest-generation IS compact executive model.

The standard RC Coupe is available as a fuel-sipping hybrid, or with a V6 petrol engine, but this F model comes fitted with a new 32-valve 5.0-litre V8.

The final figure isn’t fixed but Lexus says the RC F will be the most powerful V8-powered road car it has ever made, boasting well over 450bhp and 519Nm of torque.

The engine uses two cycles – the Otto cycle at higher revs for maximum power, and the Atkinson cycle to reduce power and fuel consumption at lower revs or when cruising, just like the engine in Lexus’ hybrids.

So many great cars here in Detroit. Like this Lexus RC-F. This or an M4? I think I'd dare to be different https://t.co/Tq34EHtk3A

How does the RC F engine stack up against its key rivals? It looks impressive next to the 425bhp BMW M4 and 444bhp Audi RS5, and should help ensure all three cars boast similar performance figures – that means 0-62mph in just over four seconds. Lexus has confirmed a limited top speed of 168mph.

The only gearbox on offer will be an eight-speed auto, developed from that in the old IS F. This will have full manual control via paddle shifters on the steering wheel. No four-wheel drive version will be offered, but all RC Fs are fitted with a three-mode torque vectoring rear differential, with standard, track and slalom modes, to help sharpen handling.

The RC F takes the sporty silhouette of the standard RC coupe but adds wider tyres, an active rear wing inspired by the LFA sports car, a more aggressive bodykit and cooling ducts for in the front bumper and bonnet.

“The form of each component is carefully designed to contribute to performance,” said Yukihiko Yaguchi, RC F Chief Engineer.

The active rear wing automatically rises at 50mph and retracts again at speeds below 25mph. The trademark stacked exhausts return on each side of the rear bumper.

The interior has been updated with a new steering wheel and new sports seats available in five different leather trims. Even the pedals have been given an update with new L-shaped rubber slits to help improve grip.

A seven-inch touchscreen display is standard, as is a touchpad controller. Located between the front seats, this lets you adjust all of the car’s major settings by using swipe gestures as you would to control a smartphone.

Strangely, although the standard RC was unveiled in November last year, this RC F version will actually go on sale first. It’s expected in the UK towards the end of this year, while the standard car will be available in the early 2015.