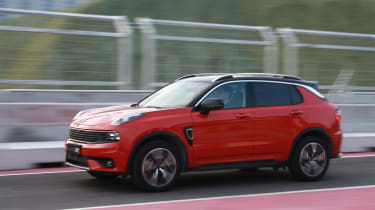 Our early drive of the Lynk and Co 01 is enough for us to see that it’s a likeable and competent SUV, offering a classy interior, plenty of technology and a decent driving experience. It’s up to European standards for quality, too, although it’s the clever ride-sharing feature and subscription-based ownership format that helps it feel innovative in the crowded SUV sector. It’s just a shame that UK buyers have another two years to wait.

The car industry is currently going through what could turn out to be its biggest revolution of modern times. Autonomous technology is soon to transform the way we use cars, and experts believe the younger generation of consumers will start moving away from the traditional car buying process.

Manufacturers are scrambling to ensure they are ahead of the game, with many adapting existing brands to suit. Chinese automotive conglomerate Geely, owners of Volvo, has chosen to tackle the problem by launching a new global brand: Lynk and Co. After getting a ride in the passenger seat earlier this year, Auto Express headed out to Shanghai to be one of the first behind the wheel of Lynk & Co’s launch model; the 01 SUV.

Despite the location of the launch and the brand’s Chinese owners, Lynk & Co considers itself an international brand with a European base. The 01 has also been designed and engineered in conjunction with Volvo in Sweden. It sits on the same ‘CMA’ platform as the Volvo XC40, and a number of engineers and designers from the Swedish brand have moved across. The firm’s British Head of Volvo Design, Peter Horbury, also found himself tasked with penning a range of Lynk & Co models, including the 01. 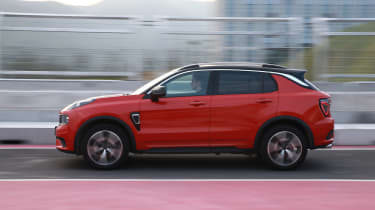 What makes Lynk & Co stand out next to the established brands is two significant innovations. The first is the subscription-based buying model (which we’ll talk more about later) and the second is the car sharing function. Using a smartphone app and the car’s in-built ‘share’ button, the official custodian can allow others on the app access to drive the car for a set time period. The system is already available in a trial form in China, but the intention is to roll it out globally, and eventually allow buyers to rent out their car to others to help offset the monthly payment.

Externally, it’s clear that the 01 has been designed to merge both European and Chinese styling tastes, with a busy yet distinctive shape. There’s more than a hint of Porsche SUV in the front-end shape, although the split-level LED headlights and intricate LED tail-light design gives the 01 a more unique and classy look at night.  Lynk and Co is targeting a much younger audience with this car, and only time will tell if those aspirations translate into reality.

While the outside is sure to split opinion, few will be disappointed by the interior design and quality on display. There’s a slick, Volvo-like minimalism to the dashboard, with enough physical switches for features such as the climate control to make it all really intuitive to operate. Unlike Volvo, however, the large central infotainment screen is landscape in orientation and uses different software  - it’s certainly feature-packed, if not quite as responsive as the systems in German rivals. The standard-fit 10.2-inch digital instrument display is a classy touch, however.

The 01 feels a significant cut above other Chinese-built models we’ve previously sampled, with a pleasing array of soft-touch materials that jar a little in places, but feel premium enough to make the 01 seem a cut above SUVs from most mainstream brands. We’re not quite talking Audi levels of execution here, but it’s certainly up to the standard expected of the class. 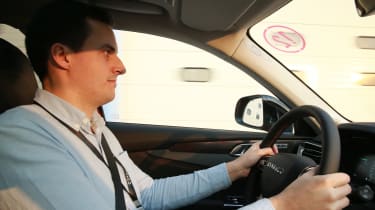 Space on offer is decent enough, too – at just over 4.5m long the 01 sits directly between the BMW X1 and X3 in terms of size, and that translates to enough room for four six footers to travel in relative comfort. Lynk & Co is yet to release a seats-up boot space figure, but the total capacity of 1,440 litres again puts it in between the two SUV classes.

Our drive is limited to laps of Geely’s Ningbo test track, but it’s enough to give us an idea of what to expect on the road. Our test cars were fitted with a Volvo-sourced 188bhp 2.0-litre petrol, which gives decent performance when mated to the slick seven-speed dual clutch gearbox but isn’t as refined when pushed as expected. A 178bhp three-cylinder petrol is also available in China, but both engines are irrelevant to European buyers – Lynk & Co will only sell traditional hybrid, plug-in hybrid and (eventually) fully electric variants after launching in Europe in 2019.

In terms of ride and handling, bosses are keen to stress that the 01 has been set up to offer a sportier feel than Volvo’s SUVs. That’s clear from the off in a two-wheel drive example, with a ride that errs on the side of firm but is well controlled without too much body lean in the bends, by SUV standards. The steering isn’t full of feel but is accurate and nicely weighted, while refinement is mostly up to scratch aside from the occasionally intrusive motor. You can feel the extra weight of the all-wheel drive models a bit on the track, yet that’s unlikely to be as evident on the road. 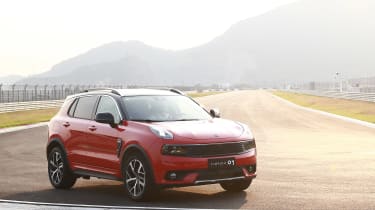 Overall, the driving experience is up to the standard expected, but the 01 hardly stands out next to the vast choice of similar SUVs in Europe. What will distinguish it when it arrives in 2019 (UK sales are set to follow a few months after an expected debut in Germany) is the way it will be sold.

Customers could buy one outright, but Lynk & Co expects 70 per cent of buyers will opt for the subscription service.  Rather than leasing, where you’re tied in to a two or three-year deal, you can pay a monthly fee for use of the car and hand it back after that month if you wish. Vice President Alain Visser describes it as “like having a Netflix or Spotify account”.

In China, that flat monthly fee includes insurance, servicing costs, breakdown cover and even free WiFi. Eventually, it’ll even allow you access to other Lynk & Co models, for example to let you swap in to a larger car for a trip away. In Europe and the UK, there will be no physical dealers, as Lynk & Co have simplified the buying process into a purely web-based service. Customers have their car delivered or can remotely ask for it to be taken away to be serviced, too.

Prices start from 158,800 yen (around £18,000) in China, but it’ll be considerably more expensive when it finally does arrive here in hybrid form. Bosses insist that even then it will be “extremely competitive” when compared to rival SUVs.