The Mazda 2 is refined, comfortable and eager thanks to punchy engines and an agile chassis 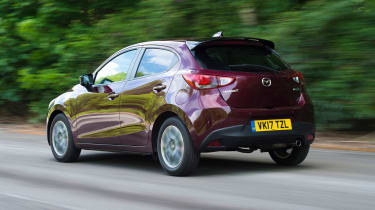 The Mazda 2 is a pleasure to drive in most respects and the chassis feels keen to impress. The steering is heavier than a Ford Fiesta’s and provides a little less feel, with a slightly more rubbery sense to its response, but there’s a good level of grip for a standard supermini. Mazda has added its G-Vectoring Control to the range. This varies the engine’s torque in corners to improve turn-in and handling. It’s a smooth addition that’s difficult to notice, and it enhances the 2’s agile character.

It allows you to carry plenty of speed through corners thanks to the decent body control, but it does mean over rougher roads the ride can become unsettled, transmitting vibrations through to the cabin which makes some of the harder plastics buzz and fizz. But otherwise the driving experience is refined and comfortable enough to make the 2 an excellent long-distance cruiser, not just an urban runaround. The 2 is also impressively quiet and composed on the motorway, with little wind or road noise.

While diesel was offered in the Mazda 2, it has now been dropped from the range. That leaves the 1.5-litre Skyactiv-G petrol, which comes in three power outputs: 74bhp, 89bhp or 113bhp. These engines do without a trendy turbo but have a compression ratio of 14:1 (the highest of any naturally-aspirated petrol engine), a strategy that Mazda insists delivers better real-world economy. The figures certainly back that up. Whichever engine you choose, the naturally aspirated unit revs sweetly, although it’s noisy. It’s something you don’t experience too often in a supermini these days.

The petrol engines really encourage you to drive hard, and you’ll be rewarded with near-hot hatch levels of performance in even the 89bhp version. It’s a sweet unit, but the lack of a turbo means the Mazda kicks out only 148Nm of torque, and it’s produced relatively high up the rev range, at 4,000rpm. You have to wind the engine up to extract the performance as a result, but this is no great hardship as the four-cylinder unit revs sweetly to its 6,000rpm power peak.

The slick five-speed manual gearbox (only the more powerful 115PS engine has a ix-speed) draws you in further. You can slot upshifts easily as the throw is just the right length, and weighted nicely, too. However, the lack of torque becomes more of an issue around town and at lower speeds. It means the Mazda isn’t as flexible as a turbocharged supermini, so is a bit more taxing to drive.

The Mazda 2 is no slouch though, and we recorded a 0-60mph time of 9.9 seconds when we tested the 90PS model. It also took 10.2 seconds to accelerate from 30-70mph. However, this performance is under full throttle, and in-gear the engine's lack of torque becomes much more noticeable.

The entry-level 74bhp petrol is adequate but it needs to be worked hard to get up to speed. However, at the national limit, this affordable petrol cruises well.