A handful of McLaren customers will be getting a brief history lesson of the brand in the shape of a limited edition XP 570GT, which gives a glancing nod to the F1 XP GT Longtail of the nineties.

Six examples of the XP 570GT will be made each commissioned by the McLaren Special Operations programme as an MSO Collection. The model is finished in a special colour called ‘XP Green,’ which is designed to replicate the dark green paint job of the 1997 ‘Longtail.’

A tan leather interior is another nod to one of McLaren’s most famous road cars. No performance upgrades have been made so each of the six XP 570GTs make use of McLaren’s 562bhp 3.8-litre twin-turbo V8. 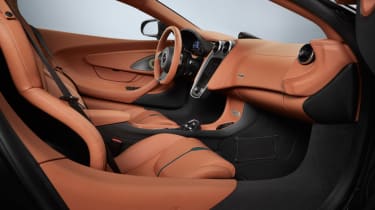 The cars have been sold to customers in the UK, Netherlands and Germany, each starting from £188,567; that’s a £34,000 premium over standard 570GT models. That price could rise further once customers get busy with the option list.

The F1 XP GT, or Longtail as it is know, was the original prototype used to meet FIA homologation requirements following the F1’s victory at Le Mans in 1995.

Elsewhere at McLaren, the manufacturer has invested £1billion into research and development, which will see the brand produce 15 new cars by 2022 - half of which will feature hybrid technology.