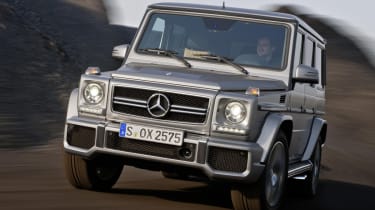 The Mercedes G-Class looks like a child’s toy blown up to life size, and the AMG engine only helps add to its cartoonish appeal. Plus, the new interior really does lift the G63 into at least the latest decade. While it’s dated to look at and costs a fortune to buy and to run, the G-Class has an inescapable charm, which is turned up to 11 by the engineers at AMG.

A lot has changed since Margaret Thatcher became the UK’s first female prime minister. But not the Mercedes G-Class. Despite a raft of minor tweaks, it looks virtually the same as when the first G-Wagen left the factory in 1979.

And although the G-Class of 2012 looks as old as time, Mercedes has seen fit to slot its latest 5.5-litre twin-turbo AMG V8 engine into its brick-shaped nose.

Admittedly, there have been a fair few changes to the G-Class’s bodywork. The AMG model gets huge, square air intakes on the front bumper, wheelarch extensions and even a sports exhaust, which sticks out under the side of the car just in front of the rear wheel.

The interior is where most of the changes have happened over the course of the G-Class’s life. And the latest update to the car has seen a significant overhaul, bringing a much more luxurious interior. Hoist yourself into the driver’s seat and you’ll be greeted with AMG instruments, a new COMAND system which looks like a mini iPad stuck on the dash, and a Harman Kardon surround sound stereo.

The rugged G-Class of old still shines through, though, with a large grab handle for the passenger, and a lofty driving position which gives you a view of the square bonnet and wing-mounted indicators.

The V8 blares into life and settles to thundery idle. Even brushing the throttle emits an excellent roar from the side exit exhausts, while acceleration is ridiculous, despite the fact that the G63 weighs 2,550kg. The turbochargers add a sci-fi movie whoosh to the engine’s rumble, giving the whole driving experience a cartoonish appeal.

But the smile is soon wiped from your face. Attempt even modest cornering and the most overactive traction control system we’ve ever experienced grabs the wheels and slows progress. And unlike on other AMG models, it can’t be disabled.

The bad news continues when you need to fill up the G63’s enormous 96-litre fuel tank. Despite the addition of stop-start and Mercedes’ super smooth seven-speed auto gearbox, fuel economy is average at best.

At least if you can afford the G63 AMG’s £123,115 purchase price, the running costs won’t keep you awake at night. And the G-Class has worn its years better than Margaret Thatcher.