Replacing popular cars is a tough task at the best of times, but when it comes to legendary saloons such as Mercedes' S-Class - universally acclaimed at its launch in 1999 and barely changed since - engineers have a real mountain to climb. 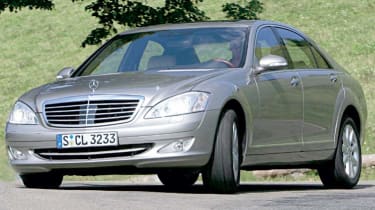 We'd been looking forward to driving the new S-Class, and it's certainly lived up to our expectations. Not only is it more spacious and better built, with superb engines, but it also debuts some very clever safety technology. Trim and quality impress, too. We'll assess the ride more thoroughly when it hits UK roads, but this is the best luxury car for less than £100,000.

Replacing popular cars is a tough task at the best of times, but when it comes to legendary saloons such as Mercedes' S-Class - universally acclaimed at its launch in 1999 and barely changed since - engineers have a real mountain to climb.

But Mercedes is nothing if not ambitious, and with increasingly stiff competition from Audi's A8, Jaguar's XJ and BMW's 7-Series, it has built an all-new model with only one goal - to be the best car in the world. To see if the machine lives up to expectations, Auto Express was the first magazine behind the wheel of the newcomer, with this exclusive test of the S500.

Even before it's driven, the S-Class impresses. The squared-off headlights may not look daring, but the extended wheelarches and swooping profile make the car look sleeker and more athletic than before, despite its extra size.

And as it's bigger in every dimension, there's ample passenger room, particularly in the rear. Trim quality has improved, with the current poor plastics replaced by leather and soft-feel materials. Meanwhile, the boot's grown by 60 litres to a 560-litre capacity.

In the front, Mercedes has simplified the dash. It has moved the auto shifter to a column stalk, while the COMAND control system for ventilation, stereo and sat-nav/TV settings is accessed by a clear dial on the transmission tunnel. It's logical and much easier to use than BMW's confusing iDrive set-up.

Fire the new 388bhp 5.5-litre V8 into life and barely a sound enters the cabin. You can hardly feel ratio changes from the 7G-TRONIC seven-speed box, and 530Nm of torque means acceleration is effortless and instantaneous. However, the 3.5 V6 petrol or 3.0 V6 diesel will be satisfactory for most buyers, and they return better fuel economy than the V8's 24mpg average.

On German roads, standard-fit air-suspension meant the new car soaked up bumps better than ever. There's very little in the way of road or wind noise, too. Through tight corners, Audi's A8 and BMW's 7-Series are more agile, but the S-Class beats them on comfort.

New technology such as a smoother DISTRONIC adaptive radar cruise control is also offered, and Brake Assist PLUS takes over from the driver in the threat of a collision with a vehicle in front. Optional safety kit includes special infra-red lights which give up to 150 metres of vision at night via a dashboard-mounted screen.

Prices are expected to rise slightly, kicking off at around £49,000. But with all the improvements, buyers are getting possibly the most comfortable and technologically advanced car ever made.