We take a ride in the Mercedes S-Class Coupe Concept, and it's more luxurious than outgoing CL 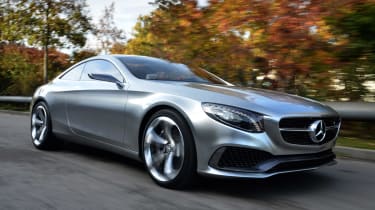 From mid-2014, the Mercedes S-Class Coupe will replace the Mercedes CL. And to get a taste of what’s in store for the new two-door flagship, we’ve been given a ride in the S-Class Coupe Concept that starred at September’s Frankfurt Motor Show.

When the Mercedes S-Class Coupe arrives, four years will have elapsed since the first design sketches were made. The clay model was signed off nearly two years ago, with the designers turning their hands to the show car in September 2012.

It took 10 months to go from the first sketches to the finished show car, which was built for Mercedes by a specialist contractor. A further two months were spent getting the finish perfect, undertaking still and video photography and shipping it to Mercedes’ purpose built building that formed its Frankfurt show stand.

The concept is built on the chassis of a current CL500, including its 449bhp 4.7-litre V8, which burbles along as the concept trundles around for our photos. You can’t tell anything about how the car will drive. The concept is limited to 30km/h and can’t be driven for long as the engine doesn’t have any cooling.

But it’s enough to tell that the S-Class Coupe will be a much more luxurious beast than the old CL. Its doors open wide to reveal a cabin bathed in light, thanks to the panoramic roof, which will be an option, while the car’s width gives ample space for passengers to travel in total comfort. Much of the S-Class’s tech will feature, including hot stone massaging seats and Magic Body Control, which scans the road surface ahead and primes the dampers accordingly.

The pair of 12.3-inch screens float like a big flatscreen TV, while the seats are generously sized and comfortable, making the S-Class Coupe feel as much like a fancy living room than one of a luxury car.

We’re talked around the car by Jan Kaul, Mercedes’ Creative Interior Design manager, and the man who oversaw the plush interior of the concept and production models. He starts by telling us that the exterior of the concept is around 90 per cent representative of the finished article, while the slightly more extravagant cabin is 70 per cent of what buyers can expect.

“The concept’s [5,050mm] length is correct, but it’s 20mm wider than the production model.” That’s to make sure potential buyers appreciate the difference between the two-door and the S-Class saloon on which it’s based. The car’s shark-like nose is 30mm higher, while the domed roof is 10mm lower, again to emphasise its dramatic proportions.

The standard model will ride on 20-inch rims, rather than the 21-inch alloys seen here, and the door mirrors and handles will be toned down.

But what you will get is a choice of front grilles, including one very similar to the concept, the feline LED headlights, the wide LED tail-lights and the option of the sliver Alubeam paint. The latter is the same stuff Lewis Hamilton’s F1 car is painted with, and helps accentuate the Coupe’s curves – especially over the rear wheels, where Kaul tells us the Aston Martin V8 Vantage and Porsche 911 were influences. They also pick out the signature ‘dropping line,’ which runs down the car’s flank and will become a feature of all Mercedes cars.

Click to page 2 to find out who the Mercedes S-Class Coupe is targeted at, as well as full interior details.