Mercedes' new folding-roof S-Class starts from £110,120, with deliveries in the summer 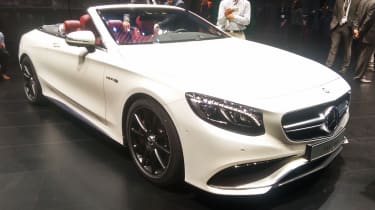 Mercedes’ S-Class Cabriolet was revealed at last year's Frankfurt Motor Show, and now full details on prices and specifications have been released - with a starting price of £110,120 for the drop-top luxury car.

From launch, three versions will be made available to buyers. The S 500 will feature a 449bhp twin-turbo 4.7-litre V8 engine that emits 199g/km of CO2, while the S 63 AMG is powered by a 577bhp 5.5-litre bi-turbo V8. It takes the cabrio from 0-62mph in 3.9 seconds, and features carbon ceramic brakes and air-suspension as standard.

With the roof in place, the cabrio’s profile is almost entirely unchanged from the sleek S-Class Coupe. The same graceful long bonnet and swept-back headlamps trail into the steeply raked windscreen and distinctive side kinks on the flanks. The rear has been revised slightly, with a longer deck meeting the more upright window of the soft-top, but the Cabriolet’s overall dimensions are identical to the Coupé’s. 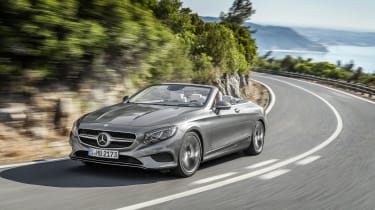 As you’d expect, the roof is state-of-the-art. An ‘acoustically optimised’ multi-layer lining combines with a (rubber-like) butyl outer coating and double glazing to make it one of the most insulated soft-tops on the market. It folds down electrically in 20 seconds – either remotely or at speeds of up to 37mph – on to an automatically extending luggage divider in the boot.

And there’s a host of new tech to make the experience as luxurious as possible. A new Thermotronic climate control system uses sensors and actuators to automatically compensate for the lowered roof and maintain the temperature, and can even detect the presence of harmful gases entering the cabin. Draft-reducing electric wind deflectors and Mercedes’ Airscarf neck-level heating are also available. Under the skin, Mercedes has concentrated on making the S-Class cabrio both as rigid and as light as possible. 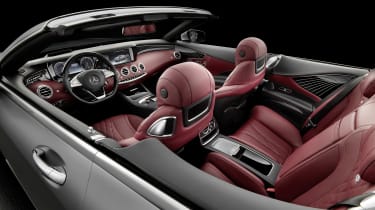 The use of aluminium and magnesium in the rear floor and firewall compensate for the additional weight of the roof mechanism, while extra floor bracing and die-cast cross members help to maintain rigidity.

What do you think of the new Mercedes S-Class Cabriolet? Let us know below...