There's no beating great design... even if the car it's applied to is starting to show its age. MG's TF is the perfect example. The two-seater first appeared way back in 1996, breathing new life into the long dormant MG brand with a sensational blend of classic styling and driver appeal. 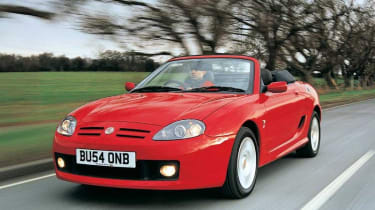 With a design largely unchanged since 1996, MG's TF is one of the longest-serving roadsters in the UK. A raft of tweaks has extended its life, but it's now feeling past its prime. The dynamics have been improved, but few will see past the dated cabin. While the price looks tempting, we would advise soft-top fans to buy elsewhere.

There's no beating great design... even if the car it's applied to is starting to show its age. MG's TF is the perfect example. The two-seater first appeared way back in 1996, breathing new life into the long dormant MG brand with a sensational blend of classic styling and driver appeal.

An instant best-seller, it helped to sustain a newly independent MG Rover, and provided a launch pad for evolutions of plainer Rover models. New suspension and a fresh front- end design strengthened the soft-top's appeal.

However, the revamp did little to address the fundamental problem of the cabin, which compared to its competitors' was badly packaged and hopelessly out of date. Now the firm has tried to rectify this as part of a mild facelift for 2005.

Unfortunately, what the two-seater really needed was a full interior redesign, but the kind of major investment that would have required was simply not available. The trim quality and switchgear are leftovers of a bygone era, while the driving pos-ition remains appalling.

What's more, the pedal arrangement is cramped, the seat is mounted too high and the steering wheel is far too low. Climb into the MG after being in a more modern roadster, and it feels truly dated. Yet all is not quite lost.

Out on the road, the TF manages to redeem itself. Its suspension has been retuned to improve comfort levels with revised springs and dampers. The MG is now more bearable on potholed city streets and fast undulating A-roads, with only the level of wind noise spoiling the driving experience on the motorway. Enthusiasts will be pleased to learn that the two-seater's well balanced handling hasn't been compromised, either.

MG claims new wheels and tyres also help, and once you become used to the vague gearchange and numb steering, the TF feels safer when it's pushed through tight corners.

Our test car was powered by the company's 134bhp 1.8-litre engine. It's far from hi-tech, but the four-cylinder unit delivers a 0-60mph sprint time of 8.2 seconds and rarely feels over-whelmed. Mounted behind the driver's seat, the engine sounds sporty, which adds to the excitement. It's undoubtedly the pick of the range, offering far better value than the 158bhp flagship.

Whichever engine you choose, the MG is now easier to live with on a day-to-day basis. With the roof up, the rear visibility is improved in all weathers thanks to its glass rear screen, while the manual hood boasts a high-quality mechanism. There's even a decent-sized boot with a 210-litre capacity.

MG Rover has also seized the opportunity to improve the standard specification across the range. All variants are now equipped with a single-slot CD player, an alloy gearknob and a leather steering wheel, while part-hide trim is also thrown in on the model we've driven here.

However, it's hard to understand why a passenger airbag remains a £275 option. Go for the mid-spec 1.8 and the TF will set you back £17,745, but there are still better cars available for the money.

Even though the MG is pitched at a price below class-leading roadsters from the likes of BMW, Mercedes and Honda, Mazda's bargain MX-5 and the Toyota MR2 are both just as afford-able as the TF. And it's worth remembering that the ever-popular MX-5 will be replaced in November, with the new car likely to bring even higher levels of quality and an updated engine range.

It's likely to have a big impact on the roadster market, offering a more complete and polished package than the dated TF. MG is going to have to work hard to keep its ageing roadster on buyers' shopping lists...